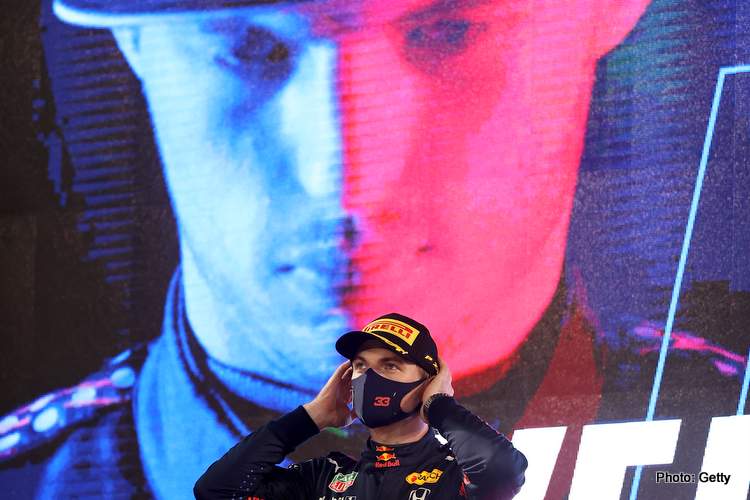 Jacques Villeneuve thinks Max Verstappen can do the business this year against Lewis Hamilton but warns that how the Red Bull driver reacts to pressure will be key to how this season pans out.

In Bahrain, Verstappen was mighty in his pursuit of an equally impressive Hamilton, but when the chips were down the Dutchman erred with an illegal overtake which cost him the race as his team told him to cede the lead to avoid a penalty.

In qualifying, a day earlier, Verstappen claimed the top spot start with a sparkling lap three-tenths faster than anyone else could muster in Q3. It was Red Bull’s race to lose and they lost it.

Nevertheless, it’s fair to assume, after the first round last month, we have us a Max vs Lewis humdinger of a Formula 1 world championship season ahead of us.

Villeneuve turned 50 last week and, on the occasion, spoke to Gazzetta about the current state of play in Formula 1; he was asked who he would put his money on this season’s Lewis vs Max blockbuster.

The Canadian motorsport legend replied: “This year Verstappen has the car and also a teammate who can help him, more than Bottas can do for Hamilton.

“However, we’ll see how Max will react to real pressure because this is the first time he can really win the world championship. In Bahrain, for example, the team got the wrong strategy because for the first time they were forced to react to Mercedes.

“It will be a long, top-level fight. The pressure on Verstappen has changed, mistakes are no longer permitted. Red Bull had victory in their pockets, but they found a way to lose the race anyway,” was Villeneuve’s frank analysis of the night at Sakhir.

The 1995 Indycar Champ and Indy 500 winner, as well as 1997 F1 World Champion, was also asked about former rival Fernando Alonso, ten years his junior, making a return to F1 after abandoning his Triple Crown dream.

Villeneuve said: “I think he stopped trying: the first year he went to Indy he was strong then he realized that doing just that race is almost impossible to win. He should run on all ovals but I don’t think he likes that.”

The real Triple Crown of Motorsport is winning the Indy 500, the Monaco Grand Prix and the Le Mans 24-Hours, a feat only achieved by Graham Hill; Villeneuve, however, has his own triple to consider, namely: F1 World Champion, Indy 500 winner and Le Mans 24 Hour winner, the latter title eludes him and he does not spare a day without thinking about the prospect.

“I think about it every day,” admitted Villeneuve who finished second at the 2008 Le Mans 24 Hours with Peugeot. “And that’s the reason why I didn’t stop, I still race with Porsche, and play in Nascar. Now there are many manufacturers with hybrids, I’d like to do something.”