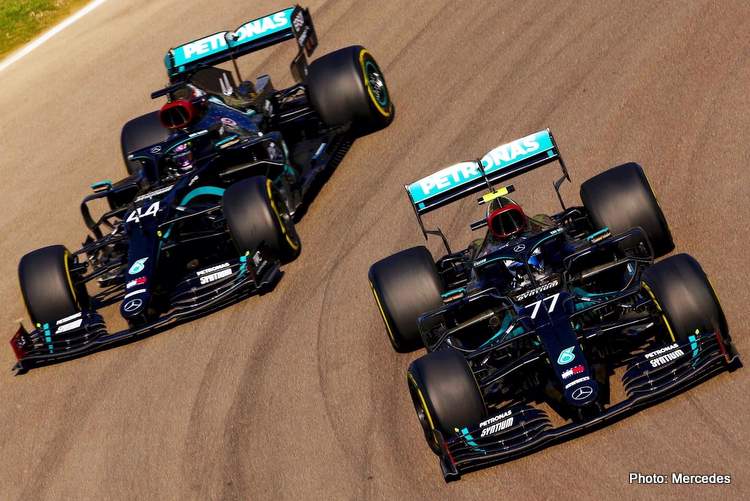 Martin Brundle believes that Mercedes W12 has yet to reveal its sweetspot despite Lewis Hamilton claiming an epic victory at the season-opening Bahrain Grand Prix last month, but the former F1 driver turned pundit is convinced the World Champions have it in them to sort things out.

Heading to Imola it appears Red Bull have the upper hand, Max Verstappen powered to pole position by three-tenths of a second at Sakhir and only excellent Mercedes strategy couple Hamilton’s brilliance prevented a Blues victory.

Nevertheless, Sky Sports F1 expert Brundle is not convinced: “I think the Mercedes is not really working that well at the moment. Red Bull and Honda (RB16B) are working particularly well, as are a few other cars.

“The regulations mean you can’t just keep throwing new upgrades at it every week as they have perhaps done in the past, but Mercedes will get it together. Hamilton and Mercedes are still the combo to beat for the world championship.”

If Bahrain set the template of what to expect, then we are in for a humdinger at Imola where another fascinating episode of the Lewis versus Max duel will unfold this coming weekend.

Brundle warns of a resurgence by Mercedes: “It depends what they do to their car in-between times. It is obviously more limited as to what you can change anyway now.

“I wouldn’t underestimate Mercedes. I mean everybody is talking about rake and how it has damaged Mercedes and therefore Aston Martin. I think it will be really close, they will sort the Mercedes out.

“Hamilton was absolutely magnificent in Bahrain and for me he won the race as much as anybody else lost it, or any team lost it. I really don’t know who will be best around Imola and that is the wonderful thing about live sport.”

F1 returns to Autodromo Internazionale Enzo e Dino Ferrari for the Emilia Romagna Grand Prix which re-emerged on the F1 calendar last year, thanks to the COVID-19 landscape, after a long absence.

Hamilton won the race there last November, while Verstappen spun out with a puncture late in the race. Notably, the Mercs were half a second up on the Red Bull driver in qualifying last year. A case of role reversal may be on the cards this time around unless, of course, Mercedes find their way around the W12 and get it firing like its illustrious predecessors.

At first glance, it might not look like much has changed from the @MercedesAMGF1 W11 to the W12. But dive a little deeper and the aero changes are significant.

Check out these shots from the team showing exactly what was adapted on the W12 ⚙️ #UBSF1 pic.twitter.com/nsidzl0CdG