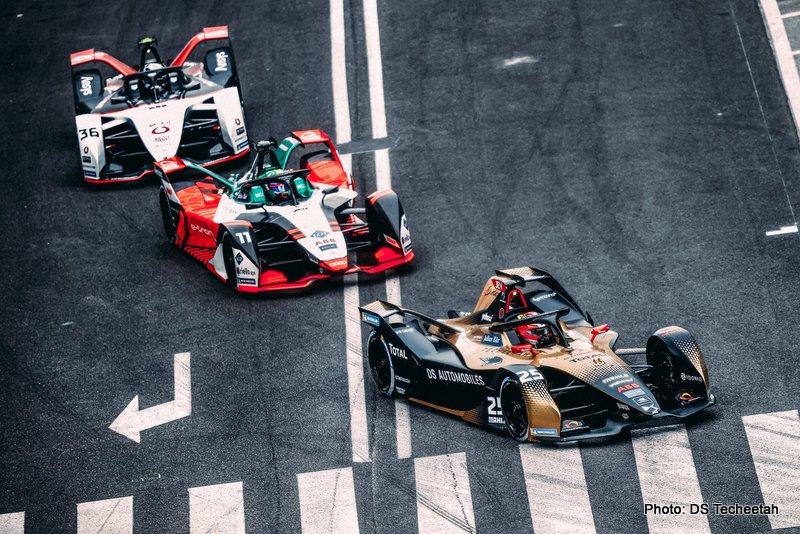 DS Techeetah driver Jean-Eric Vergne won a dramatic first leg of the Formula E Rome E-Prix after Lucas Di Grassi suffered an issue from the lead of the race.

Di Grassi looked to have come out on top after a race-long, back-and-forth battle between him and Vergne, but lost power with under five minutes to go.

Sam Bird finished second after a nice recovery drive from 10th on the grid, ahead of his Jaguar teammate Mitch Evans in third.

Ladies and Gentlemen, your #RomeEPrix !

The race started behind the safety car due to the damp conditions, with green flag racing getting underway with just over 40 minutes remaining.

Polesitter Stoffel Vandoorne got through the first few corners in the lead but was closely followed Andre Lotterer and the two collided when the Porsche driver tried to make a move up the inside into Turn 7. Lotterer was able to rejoin in seventh but later picked up a five-second penalty, while Vandoorne dropped back to 13th, with Oliver Rowland inheriting the lead in the process.

Rowland immediately came under pressure from Di Grassi, only for the Nissan e.dams driver to be given a drive through penalty for a power infraction. This gifted the lead to Di Grassi, with Vergne in second and Robin Frijns third.

Here’s the moment we went 🟢 in Rome for Round 3 🇮🇹!

The Frenchman was the first to blink, taking his first attack mode with 23 minutes remaining and falling back to fifth in the process, just ahead of Bird who had made a solid start with a few nice overtakes.

Frijns and De Vries were next to take attack mode, coming back out behind Vergne, but crucially ahead of Bird. Meanwhile, Vandoorne was recovering well from his early incident with Lotterer and having taken his first attack mode, had moved up eighth with 20 minutes to go.

Di Grassi took his first attack mode soon after, slipping into third position and he quickly began filling the mirrors of Frijns and Vergne ahead of him. Frijns made a move to pass Vergne, but failed and became vulnerable to Di Grassi, who passed the Dutchman into Turn 7, with De Vries also taking advantage.

The Frenchman then passed De Vries to reclaim the lead, with Di Grassi and the Dutchman colliding as the Audi driver looked to follow Vergne through. De Vries took his final attack mode soon after though, promoting Di Grassi to second.

With the front three swapping places almost every lap, Bird had quietly been able to move up to fourth, followed by the determined Vandoorne in fifth. The British driver was then able to pass De Vries and move up to third, with his teammate Evans following him through into fourth, having passed Vandoorne using his attack mode.

With seven minutes remaining, Di Grassi finally made a move stick into Turn 4, surprising Vergne on the inside to grab the lead of the race. Vergne then tried to fight back into Turn 7, but the Brazilian was able to hold his position.

However, his lead was short-lived as Di Grassi’s Audi lost power and the Brazilian fell back through the field quickly. As he was passing Di Grassi, Vandoorne’s Mercedes spun around after running over a manhole cover, taking out his teammate De Vries in the process.

Live timings and how to watch the race https://t.co/sHOKGxvLZW#RomeEPrix pic.twitter.com/qAEQd705lp

This brought out the safety car with only four minutes remaining and Vergne in the lead, followed by Bird and Evans. With Vandoorne’s car beached on the side of the track, the race was unable to restart and Vergne could celebrate the most dramatic of victories. 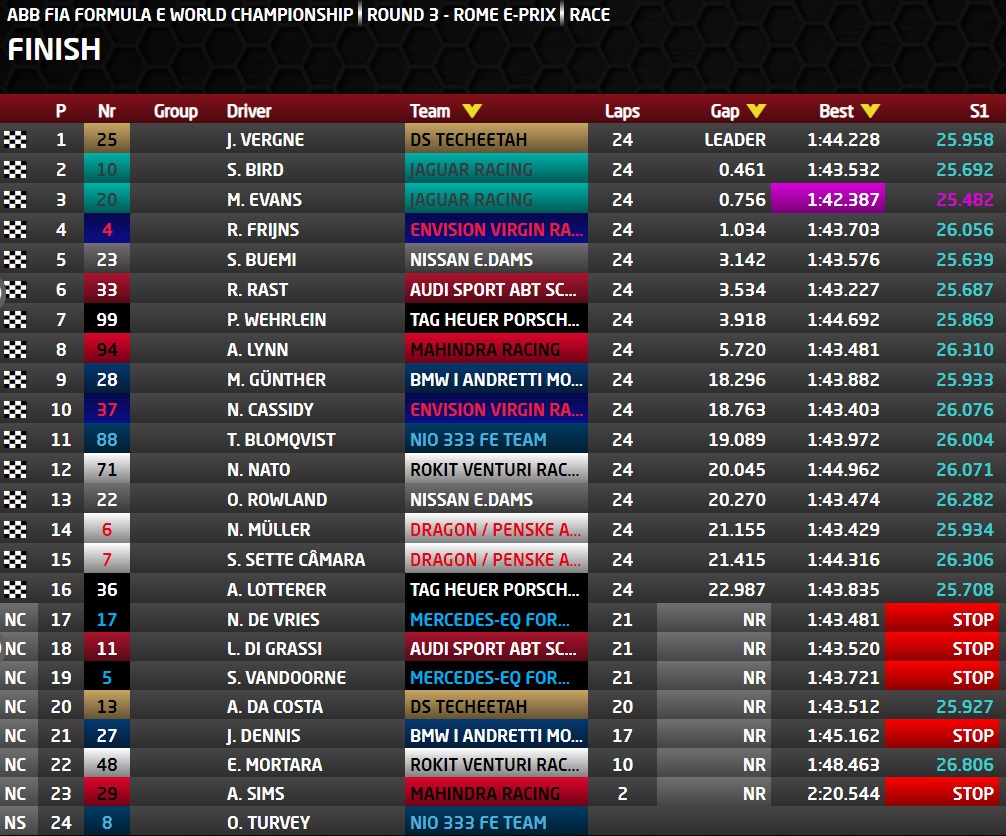