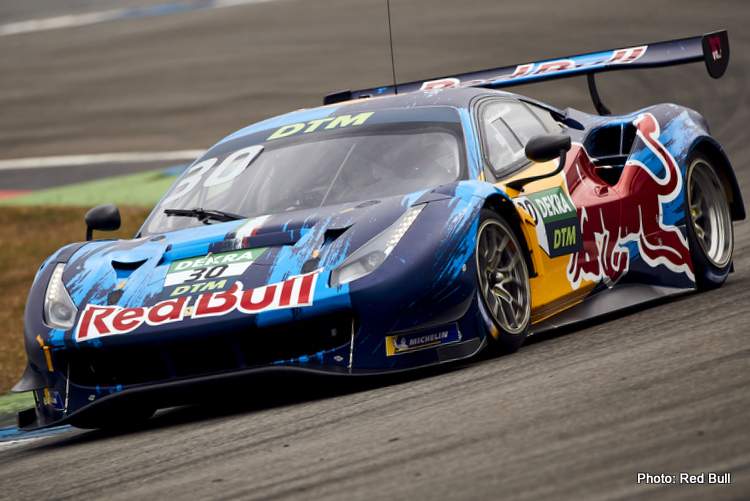 A new look DTM awoke from the preseason with testing at Hockenheim this week, the once super GT or GT1 concept is gone and replaced by the increasingly relevant GT3 class.

Gone are the silhouette prototypes, replaced by GT3 cars supported by Mercedes, Audi, Ferrari, McLaren and BMW. The official website reported: “DTM has awakened from hibernation.”

There were 17 drivers in action in 15 GT3s in preparation for the 35th season of the iconic series. However, persistent snowfall in the afternoon ended the first of two days of testing prematurely. In addition, temperatures just above freezing point did teams and drivers no favours.

Among those in the cockpit were axed Red Bull F1 driver Alex Albon in the Alpha Tauri AF Corse Ferrari 488 GT3. He was sixth fastest, four-tenths down on the top time and a couple of tenths down on Liam Lawson in the Red Bull backed Ferrari.

A notable on duty was veteran Gary Paffett who ended the day ninth quickest in the Mücke Motorsport Mercedes-AMG entry,

Maximilian Götz, who set the fastest time of the day in the Mercedes-AMG GT3 that morning, said: “It’s a great feeling to be back in the DTM.”

Last year’s runner-up Nico Müller was the fastest in Team Rosberg’s Audi R8 LMS. “A lot is new,” said Müller. “I prepared for the season just as I always did, but spent more time with my team, especially with my new vehicle engineer.”