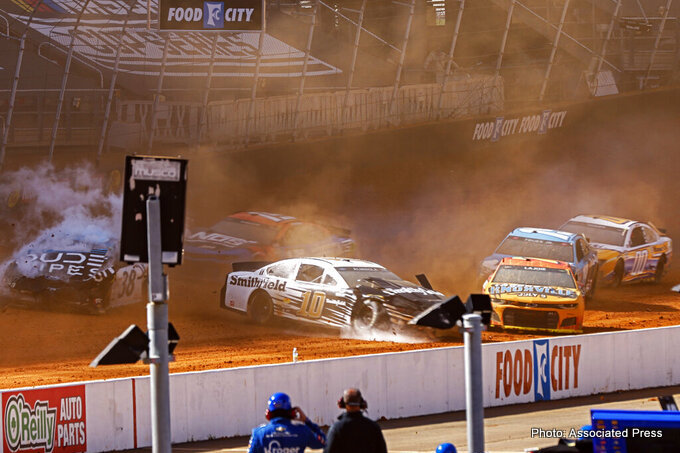 NASCAR was in action on the dirt at Bristol Motor Speedway this weekend, the first return for the Cup Series since 1970.

Both the Cup Series and Trucks were in action over the weekend which was heavily impacted by weather. Torrential rain and flooding pushed both races to a Monday double-header, and understandably so after an attempted run at the Truck’s Heat races on Saturday was stopped after just one lap.

Well you see, what had happened was… pic.twitter.com/6lBEvvNIlj

Martin Truex Jr., making his first Truck Series race in 15-years, dominated Monday’s race to take the chequered flag, looking for the extra experience on the new surface at Bristol.

Truex, who had almost no prior experience on dirt, led 105 of 150 laps, winning all three stages along the way in his Kyle Busch Motorsports entered truck.

The dirt provided an extra challenge in terms of visibility which was at a premium for both the Cup cars and the Trucks within the ‘Colloseum’ at Bristol. A red haze floated within the stadium over the weekend which made wreck avoidance hard for those in the second-half of the field.

In the Cup Series, it was Joey Logano who took the win ahead of Ricky Stenhouse Jr. and Denny Hamlin. Daniel Suarez managed a career-best fourth place in the #99 Trackhouse Racing car, part-owned by Pitbull.

With Speedway Motorsports spending nearly $2 million in converting the bullring into a dirt racing haven, there was a lot of hype in the NASCAR community going into the event.

After the flag, Logano said to the fans in a reduced capacity Bristol: “How about Bristol on dirt, guys! This is incredible.

“There’s nothing like winning at Bristol, but putting it on dirt and being the first to do it is very special.”

“It’s only my fourth dirt race ever, so I had a lot of fun trying to figure it out,” Logano said. “I was having a blast racing, trying to find the right lanes, moving around.”

To add, it was also announced over the tracks PA system that another dirt race at Bristol Motor Speedway will return to the calendar in 2022.

The NASCAR Cup Series will return to the @BMSupdates dirt next spring! pic.twitter.com/ZWT9soMCQz

In other news, IndyCar continues with its preseason testing with Texas Motor Speedway playing host to teams on Tuesday and Wednesday with just over a month to go until the track hosts a doubleheader on the weekend of May 1 and 2. The IndyCar season opener is scheduled to take place at St Petersburg on April 25.

NASCAR faces an off-week with Martinsville playing host to both the Cup Series and Xfinity Series on April 9 and 10.