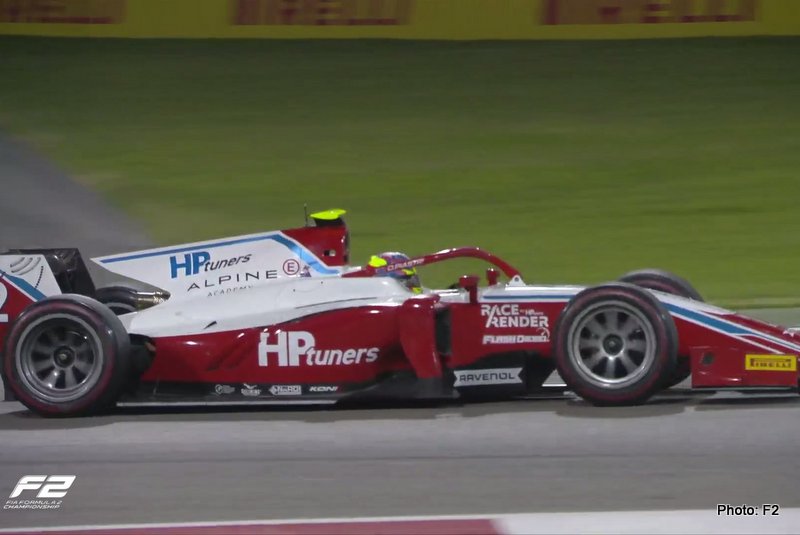 Drivers opted for a split-strategy on the grid, but the strategy was thrown in the air with late safety cars, both physical and virtual, leading to a dramatic finish which Piastri described as his ‘craziest race win’.

Juri Vips, who was disqualified from qualifying, salvaged a P10 finish in Sprint 1 to secure a reverse grid pole in Race 2.

Out of Turn 1, it was Vips who held the advantage ahead of Lirim Zendeli as chaos ensued behind the leaders. Dan Ticktum, for the second time on Saturday, was involved in a collision at Turn 1, this time being caught by Robert Shwartzman in straightening up for Turn 2. Both cars were taken out of the race with the Aston Martin Vantage safety car deployed for the first time.

The green flag was deployed coming onto Lap 4, and Zhou made quick work of Zendeli, securing second-place on the run into Turn 4. Zhou put in the fastest lap of the race with the help of his soft tyres and went into Turn 1 alongside leader Vips, making a nearly identical move for the lead again at Turn 4.

Race 1 winner Liam Lawson was another driver in a hurry to work his way forward. Full of confidence off the back of a first career F2 win earlier in the afternoon, he had jumped up from tenth to third by Lap 5.

Zendeli’s run at the front ended early as a puncture struck after contact with Christian Lundgaard at Turn 1 undid his race. Zendeli would fall a lap down as a result.

Charging from the back of the grid was Drugovich who has proven to be a hard compound expert in Formula 2. In under ten laps, the Brazilian had gone from sixteenth on the grid to fighting for a podium.

With 15 laps to go, Zhou had managed to edge out a 2-second lead ahead of Vips on a no-stop strategy. Zhou would need to build a 28-second lead if he wanted to come out of the pits in front of the competition. A seemingly impossible task.

At the halfway stage, Hitech looked to be in a prime position to capitalise on the split strategy of Zhou. Both cars were within 4-seconds of Zhou with the one-stop clearly not a viable strategy after all, but that would depend on the ability of the drivers on hard tyres to nurse the compound the distance on a track notorious for its high degradation.

That was until Drugovich misjudged an overtaking manoeuvre on Lawson, taking the New Zealander out of the race and putting a dampener on his day. The safety car was again deployed and Drugovich placed under investigation by the stewards. The other Hitech car of Vips made a brave call, pitting from second for a set of soft tyres while Zhou stayed out on his old set in front. Vips would restart fifth.

The second safety car restart allowed for Marcus Armstrong to take second-place from 20th on the grid. Vips’ charge forward was just getting underway making it back to third by the end of the first lap back under green.

The manic battle for P2 at the restart allowed for Zhou to build a 3-second gap, his largest of the race but the pace at which Vips was closing would have been alarming for the Chinese driver.

Those who stopped under the second safety car for fresh tyres were instantly handed a huge advantage over their competitors as shown by the Vips-Zhou battle.

Alessio Deledda’s HWA Racelab came to a stop by Turn 2 which would change the makeup of the race, offering Zhou a brief breather which he would have been desperate for. Vips misjudged the restart which allowed Oscar Piastri to join in a three-way battle for the lead. The drama continued as Vips’ engine cut at Turn 11, dropping him to fifth on track with a five-second penalty for a VSC infringement compounding his struggles.

Piastri, with one lap to go was within half-a-second of the Zhou, with Lundgaard tucked in behind again. Piastri eased pass Zhou on the straight, bringing Lungdaard with him. The Dane was forced wide, opening the door again for Zhou, but Piastri would run away on his fresh softs to take the chequered flag in a hectic finish to the race.

With Lundgaard handed a penalty during the race, the top three read as Piastri, Zhou and Jehan Daruvala, who was promoted. However, Lundgaard’s second place finish was later reinstated, pushing Daruvala into fourth. 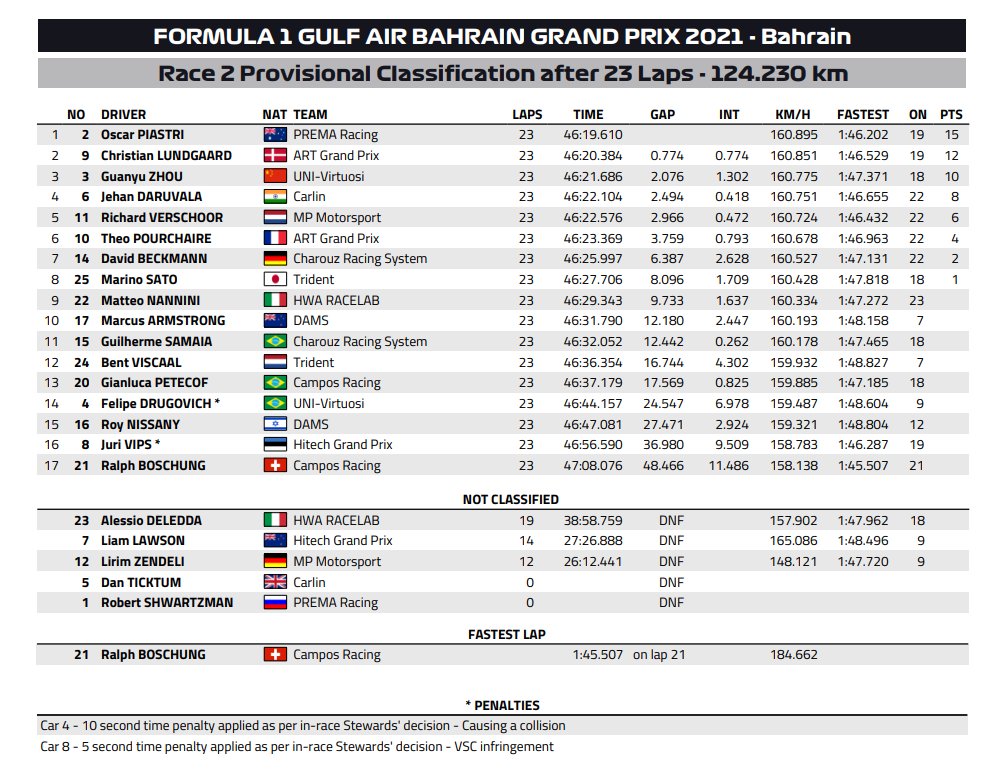