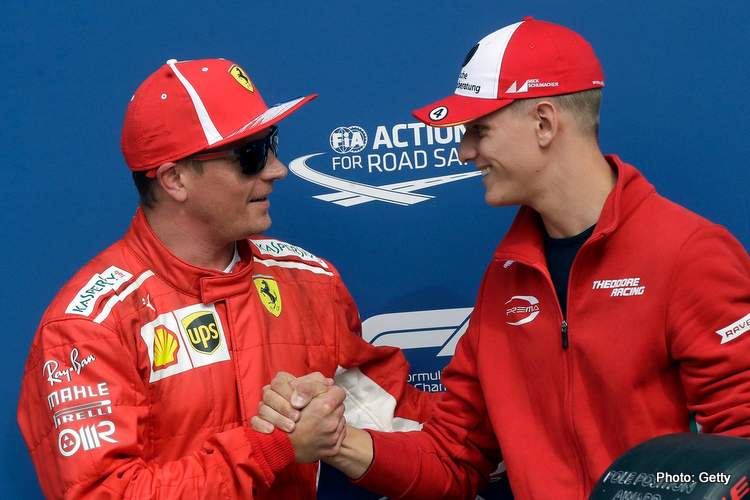 Mick Schumacher has been getting tips from Kimi Raikkonen, the man who took over from father Michael Schumacher at Ferrari, as he prepares for his Formula 1 race debut at the Bahrain Grand Prix season-opener.

The 22-year-old German, who won last year’s Formula 2 title and will be lining up for the Haas team, told reporters it was funny to think some drivers will have raced against two generations of his family.

Raikkonen, now 41 and at Alfa Romeo, made his debut 20 years ago with Sauber and replaced seven-time F1 world champion, Michael, at Ferrari at the end of 2006.

The Finn remains Ferrari’s most recent F1 world champion after winning the title in 2007 and helping them to the constructors’ title with Felipe Massa a year later. Nothing since then.

Ahead of his debut this weekend, Mick told reporters: “It’s going to be nice to see how things are going to turn out on track. I haven’t driven with many of them in the test because I was mostly with some other guys.

“I was driving with Kimi and I know Kimi quite well, let’s say, from the track. He’s always very nice, and it’s very nice talking to him and getting obviously some info and tips here and there.”

Many have questioned the placement of young Schumacher with Haas F1 team by Ferrari headed by Mattia Binotto. The relatively young American team has no history of developing talented drivers, yet this year they have two F1 rookies in their care.

Common sense would have been to make place for rookie Schumacher alongside veteran Raikkonen at Alfa Romeo (aka Sauber) who have a stellar history developing young blood, the Finn himself a prime example of that, as were many young drivers who went on to become big names in the sport.

As it appears the relationship and affection are there, Raikkonen could have served as a mentor for the son of his former rival. Instead, Binotto and the decision-makers at Maranello, have decided to hang on to journeyman Antonio Giovinazzi for another year.

Thus, as exciting as young Schumacher’s arrival on the biggest stage is, this should be tempered by the reality that he is likely to toil at the wrong end of the field this season with his only measure being fellow-rookie Nikita Mazepin in the sister car.

Therefore the German’s first challenge will be to neutralise his Russian teammate by outshining him this season, with the hope that next year Michael’s son gets the race seat he deserves.

Worth noting that other drivers, who raced against Michael, who remain on the grid are: