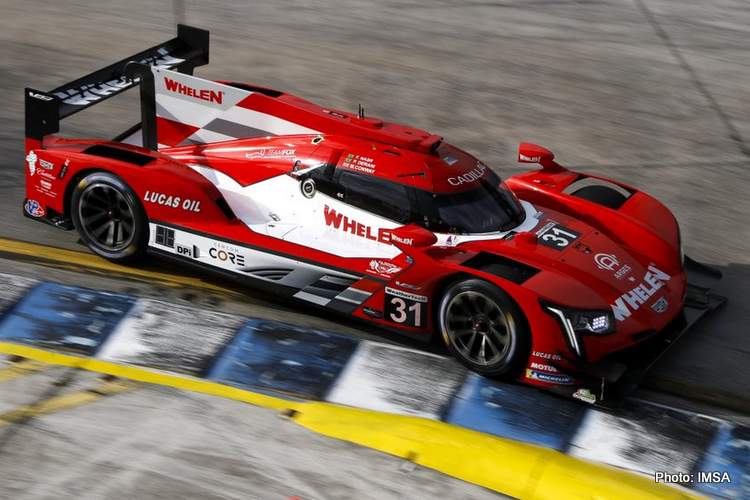 After heavy overnight rain removed the rubber laid down during Thursday’s practice sessions, Derani carefully found his footing before pushing the No.31 car to the best lap time of 1:45.354 seconds (127.797 mph) to top the seven-car field in the Daytona Prototype international (DPi) class.

The rain made everything uncertain, Derani explained: “It washed the track out. We didn’t know coming into this qualifying if the car was going to behave as it did Thursday.

The former NASCAR star who’s transitioning to sports cars and IndyCars was starting his final lap during the 15-minute session when the rear end of the No. 48 Ally Cadillac DPi-V.R lost traction and the car slammed into the tire barrier.

Johnson emerged from the car under his own power and was later evaluated and released from the infield care center, “I’m certainly disappointed that I tore up the car for the team, putting them in a difficult position.

“They seem eager and ready for the challenge to get the Ally Cadillac back together for tomorrow. I spun in Turn 16. I was trying to get up and going to catch another flying lap before the session ended.

“Sadly, I had some debris on my tires as I entered (Turn) 17 and tagged the outside wall. I learned a couple of lessons there. Call them rookie lessons,” added the tintop legend.

Derani was confident the Action Express crews would get the No. 48 car, which Johnson co-drives with Kamui Kobayashi and Simon Pagenaud, ready for the start of Saturday’s race.

“I’m pretty sure the whole team will work together to get the car ready for the race,” Derani said. “When we win, we win as a team, and when we lose, we lose as a team. I’m pretty sure with a fantastic effort and a great team, the car will be ready for tomorrow’s race.”

Derani, the three-time Sebring Twelve Hours winner who will co-drive the No. 31 Cadillac with Felipe Nasr and Mike Conway in Saturday’s race, said the question wasn’t with the car but with the condition of the track.

“The general feeling was always very good,” he said. “I knew that I had the confidence to attack lap after lap and find my limit. (We) unloaded quick and only made small changes.”

He’ll co-drive the Konica Minolta-sponsored DPi with Filipe Albuquerque and Alexander Rossi when the race begins Saturday morning. The No. 10 won the Rolex 24 At Daytona to open the 2021 IMSA WeatherTech SportsCar Championship season.

“(They) were really on me to get on the fronts early, get them heated up, and get the car going,” Thomas said. “That was great advice. I got the brakes to come in and we were able to go pretty fast.”

The No. 11 will start eighth overall and one place ahead of Ben Keating, who was clocked at 1:51.148 (121.135 mph) in the No. 52 PR1 Mathiasen Motorsports ORECA he shares with Mikkel Jensen and Scott Huffaker.

In LMP3, Lindh outlasted a final-lap charge by Oliver Askew to win the Motul Pole Award for Performance Tech Motorsports. Lindh recorded a lap of 1:56.001 (116.067 mph) in the No. 38 Ligier JS P320 he shares with Mateo Llarena and Dan Goldburg.

“The car was really good,” Lindh said. “I could have improved a little bit, but it was enough. It was the first pole in LMP3 and IMSA. It’s a long race, so we won’t rush anything too much.”

The live telecast begins at 10 a.m. on NBCSN, moves to the NBC Sports App and NBCSports.com at noon and returns to NBCSN from 7 p.m. through the race conclusion.

Click on banner below for live TV coverage of the 69th 12 Hours of Sebring Presented by Advance Auto Parts. 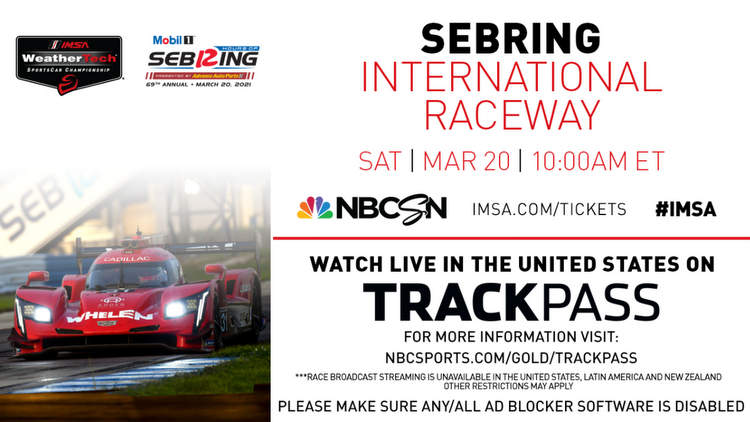