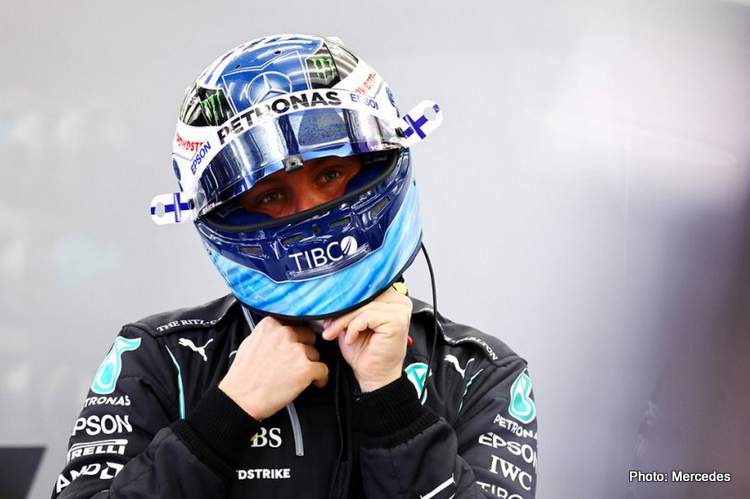 Valtteri Bottas had a cheeky stab at critics by implying his Mercedes team were sandbagging during Formula 1 preseason testing in Bahrain this past weekend.

Mercedes were uncharacteristically out of sorts, both Bottas and Lewis Hamilton struggling to find the sweetspot on the car despite the Finn topping the timesheets at the end of day two at Sakhir.

The World Champions were on the back foot from the moment testing began on Friday when a gearshift issue forced a gearbox change at the expense of valuable track time for their new car.

At the end of the final day, in which Bottas was 16th fastest, he told Ted Kravitz on Sky F1: “You know, we’re always sandbagging in testing, so that’s it.” The sarcasm obvious.

After topping the timesheets on day two, he said of the accomplishment: “It’s so difficult to say what that means. I can’t be jumping around happy – it is only testing.

“I would say that one of the big issues with the car is the rear end. It’s quite snappy and it’s quite unforgiving and that, topped up with the new tyres that feel quite sensitive to the sliding – it’s not that easy. We’re trying to calm the car down a bit and that way trying to get some more pace.”

“It’s a lot more limited and a lot more compromised this year for everyone. It’s less time in the car before the first race, so I would be happy if we could get through the programme and the plan we have for [Sunday] nice and cleanly, plenty of laps and get more of a feel of the car.

“But already I felt good with the car, confident, and at least at times pretty fast. So I just need more laps and more feel, and I’m happy.”

Summing up testing from his perspective Bottas said: “Day one was compromised for me so I’m pleased the past two days have been efficient and clean. Today, like yesterday, we had plenty of laps and ran good quality tests.

“I’m still not entirely comfortable but we’ve been moving forward and getting better. There’s still more work to do; we’ve collected lots of data over these past few days which we will analyse to help us make the car faster ahead of the first race.

“Time is even more limited now with the recent changes but our recovery from the first day has been very good. I absolutely believe that the car and team has the potential to fight for the title.

“I don’t think the package is quite there yet in terms of performance but I have no doubt it will be. I feel like I’ve had enough time in the car, performing short runs and long runs, and I really feel comfortable and confident.

“From my side I’m ready and as a team, we will be ready,” added Bottas who will start his ninth season in Formula 1 and will be hunting his tenth win (and more) this year.