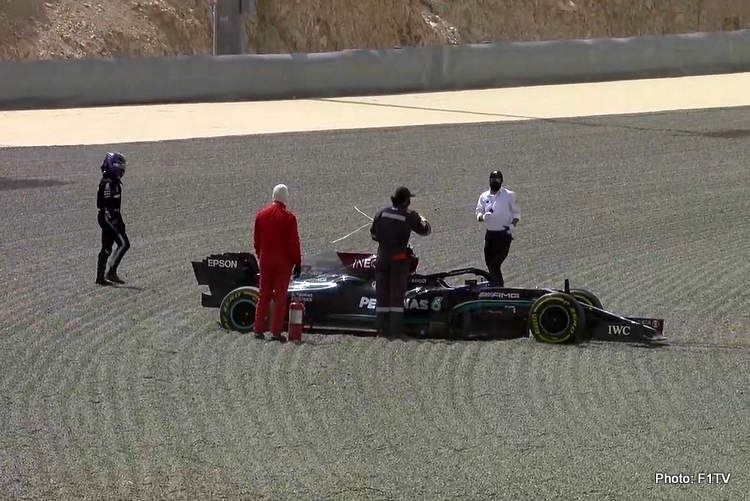 Problems for Mercedes continued early on Day 2 of Formula 1 testing in Bahrain when Lewis Hamilton spun his car, beached the new W12 and forced a red flag spell as the car was retrieved.

It’s been an unusual start to testing for the normally bullet-proof world champions who had to change the gearbox yesterday morning during Valtteri Bottas’ stint in the car.

The Finn did limited running before handing to his teammate who did reasonable mileage, but it was always a case of catch-up for the team on Friday.

On Saturday morning with Hamilton on duty, the Champ never found a good rhythm before he spun in the tricky conditions that prevailed. The #44 car slid off backwards at Turn 13, the rear wheels dug into the sand where the car remained.

Karun Chandhok observed for Sky F1: “It’s really rare to see a mistake from Lewis, especially at testing. I’m trying to think of all the pre-season tests I’ve been to in the last five, six years and I can’t think of one time he has been in the gravel.

“You see the odd thing where he goes off in the run-off area or something – but everyone does that. To see him cause a red flag, I can’t think of a moment like that.”

With colleague Martin Brundle adding: “It’s so unusual to see Lewis looking at a stricken car these days but he’s not exactly the only driver to be flying off the road today.”

Hamilton alighted the car and watched as safety crews retrieved the car, his body language then and as he stormed through the Mercedes pit garage suggested an unhappy Champ at this early stage of the day.

RED FLAG: That one is on us! Lewis is beached in the gravel at Turn 13. pic.twitter.com/vuYOwV4fMR