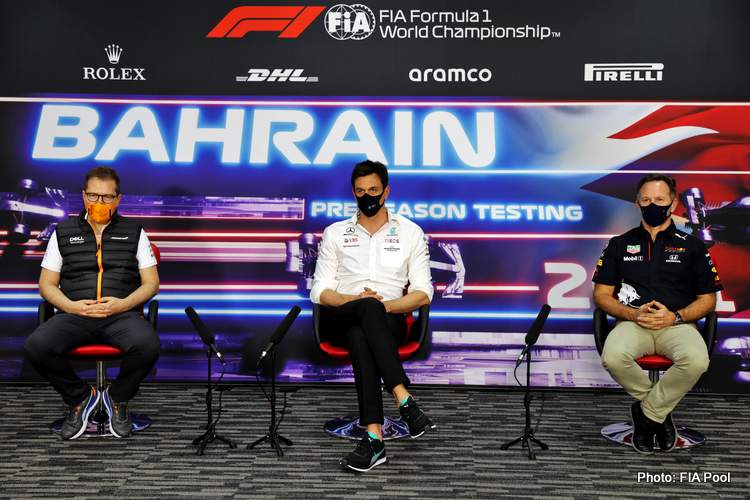 Mercedes, Red Bull and McLaren bosses, whose teams were the top-three in Formula 1 last year, have given their backing to proposed Saturday sprint qualifying race as an experiment to establish an alternative race weekend format.

The sport is expected to confirm the experiment, which would award championship points on Saturday as well as in Sunday’s race, for a limited number of the season’s planned 23 grands prix.

The sprint race would effectively serve as qualifying for Sunday’s main event. The teams are due to have further discussions in Bahrain this weekend.

“There’s always a million reasons why not to do something, but I think the concept’s interesting,” Red Bull boss Christian Horner told reporters on the first day of pre-season testing on Friday.

“I think the way they´re looking at introducing it is reasonably responsible over three events, so why don’t we try it? Let’s give it a go.”

Formula 1 chief executive Stefano Domenicali told the Daily Mail newspaper this week that one of the sprint races would be at the British Grand Prix at Silverstone.

Formula One sources have also mentioned Canada’s Montreal, Italy’s Monza and Brazil’s Interlagos as other potential hosts of sprint races although the calendar could change due to the COVID-19 pandemic.

Mercedes boss Toto Wolff said the format could boost television viewing figures considerably, “I’ve seen it in DTM touring cars that we were almost able to double the TV audiences with the second race.

“I think we should give it a go and then be really honest to ourselves what was the financial impact, and impact on the eyeballs, that we were able to generate more and what is the show factor?” added Wolff.

McLaren’s Andreas Seidl said the devil was in the details but there was now a good proposal on the table, “I think we will come to a final conclusion during this weekend, and then it’s down to Formula 1.”