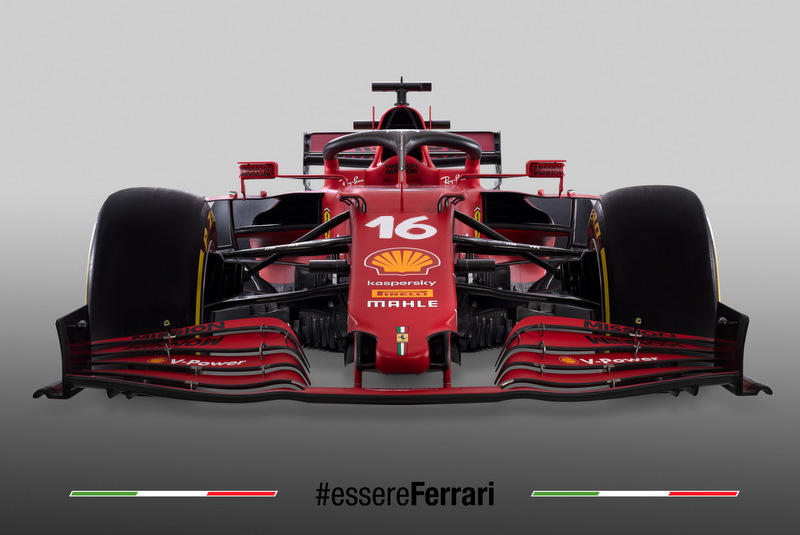 Ferrari have unveiled their new Formula 1 car, the SF21, meaning that all 10 teams have now launched their 2021 challengers.

The Scuderia showed off their latest F1 car through a virtual launch, with the SF21 adorned in the usual iconic red livery, while also incorporating green Mission Winnow branding and a burgundy rear-end.

Ferrari will be hoping to bounce back from a difficult year where their underpowered car struggled to compete and the team finished the season sixth in the constructors’ championship without a race win.

There have been changes made over the off-season though, with Ferrari optimistic that they have been able to recover some power following the confidential agreement the team struck with the FIA as a result of an investigation into their 2019 power-unit.

Charles Leclerc enters his third season as a Ferrari driver in 2021 and will be partnered by former McLaren man Carlos Sainz, who replaced Sebastian Vettel over the off-season.

The car will hit the track for the first time on Thursday for a filming day at the Bahrain International Circuit, with pre-season testing getting underway at the same location on Friday.

“The rear end is reminiscent of the burgundy red of the very first Ferrari, the 125 S,” team principal Mattia Binotto said. “But as it moves gradually towards the cockpit area, it transforms into the modern red that we have used in most recent years. This season presents us with many challenges and through this livery, visually, we reboot from our past and head into the future.”

Ferrari racing director Laurent Mekies added: “There’s plenty of positive energy coming from our two drivers. Carlos has spent a lot of time in the factory and has integrated with the team very quickly.

“As for Charles, he is already perfectly at home with the team: he knows what he wants and is also very aware of the role he has in the team, both in and out of the car. Over the winter, we have witnessed the two guys getting on very well together and this can only be a good thing for the whole team.”