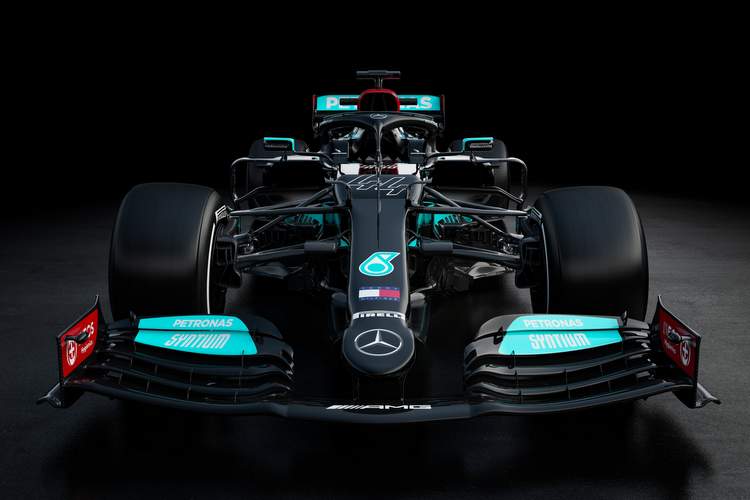 Mercedes have unveiled their 2021 Formula 1 car, the W12 E Performance.

Sporting the same black livery that the team began using at the start of the 2020 season in response to the activism of driver Lewis Hamilton, it is part of the team’s commitment to improving diversity and inclusion within the team and F1 as a whole.

Mercedes are targeting an eighth consecutive constructors’ championship in 2021, while Hamilton is going for his own milestone, an eighth drivers’ title, which would take him out in front as the most successful driver in the history of the sport, ahead of Michael Schumacher.

Valtteri Bottas will partner the Brit for a fifth consecutive season, with the Finn still aiming to secure a maiden championship. Both drivers are signed to one-year deals at this stage, with speculation surrounding the team that George Russell and Max Verstappen could be eyeing a 2022 drive.

The car will hit the track for the first time in Bahrain at pre-season testing, which gets underway on March 12.

Team principal Toto Wolff said: “Every year we reset our focus and define the right objectives. That may sound simple but it’s damn hard and is probably why there are no sports teams out there with seven consecutive titles. So many things can happen and it’s very natural to get used to success, and therefore not fight as hard for it.

“But this team has not shown any of that. I see the same fire, hunger and passion now as I did the first time I walked through the doors in 2013. Every season presents a new challenge and therefore, a new goal for us to achieve. 2021 brings changes to the regulations, which could impact our competitiveness, plus the cost cap and working on the major rule changes of 2022. These challenges excite us.”

Introducing the W12 🖤🥰 Get your first look at our 2021 F1 car! #WeLivePerformance pic.twitter.com/RiZEBTyarb