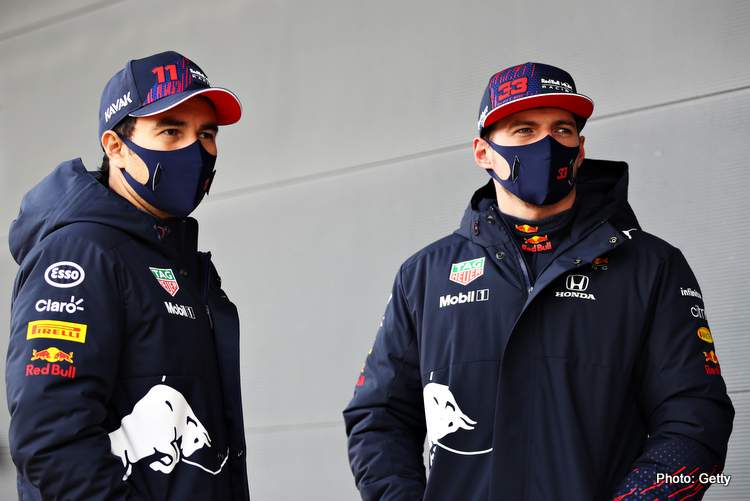 One of the most anticipated driver pairings of the 2021 Formula 1 season has to be Sergio Perez joining Max Verstappen at Red Bull.

The Mexican veteran against the Dutch prodigy, Mr Reliability versus Mr Speed. Verstappen has humbled all his teammates to the point of turning the Red Bull young driver programme into a face, the pipeline constantly broken by Verstappen.

To the point that the team have decided to ditch their young drivers and stick one in who is expected to not only help the other Blue car in the fight for the title but also help raise the car.

Speaking after the Red Bull’s film day at Silverstone last week, Perez told media: “Max is a great talent and I can’t really wait to start working together with him.

“You can see that he’s so natural in his talent and technically he’s very strong as well, so we’re just looking forward to getting the car up there and to start fighting to get as many points as possible for the team.”

Racing Driver Rule #1 is to beat your teammate, this will apply from the get-go as one asserts authority and the other makes his mark in a team that has Max Verstappen written all over it.

He will no doubt be intent on beating Perez, but at the same time has already said he will do his talking on track, nevertheless, he showed is clearly showing his new teammate respect.

“Sergio’s been in F1 now a while,” Verstappen said. “I think he’s proven that he’s a good points scorer, and I hope that as a team, we can make it difficult for Mercedes, especially, because I think they still are the favourites.

“So I just hope as a team, and together with Sergio, we can score a lot of points,” added the 23-year-old who, in his F1 career, has partnered Daniel Kvyat at Toro Rosso, as well as Daniel Ricciardo, Pierre Gasly and Alex Albon at Red Bull.

Perez has not been measured with a teammate so formidable during his tenure with midfield teams; his biggest test was Esteban Ocon during their tempestuous two years as teammates at Force India.

Team boss Christian Horner is satisfied with the early progress of their new driver: “I think he’s settling in very well. Obviously, he’s been around for a while, he’s a popular member of the paddock and you can see why.

“He’s an easy guy to get along with, he’s doing all his homework, he’s been working hard over the winter. He’s really grabbing this opportunity with both hands.

“I think for Checo, after having driven for one team [Force India/ Racing Point] for so long, inevitably there’s going to be a lot of differences, just in the procedure, to the way we operate.

“So any mileage that we’ve been able to give him is of huge value as he gets to know his engineering team, how our machines work, how our meetings work, what’s required of him as a Red Bull driver.

“So I think it’s been invaluable these last couple of days for him,” added Horner.