Gasly, Tsunoda take part in AT02 shakedown at Imola 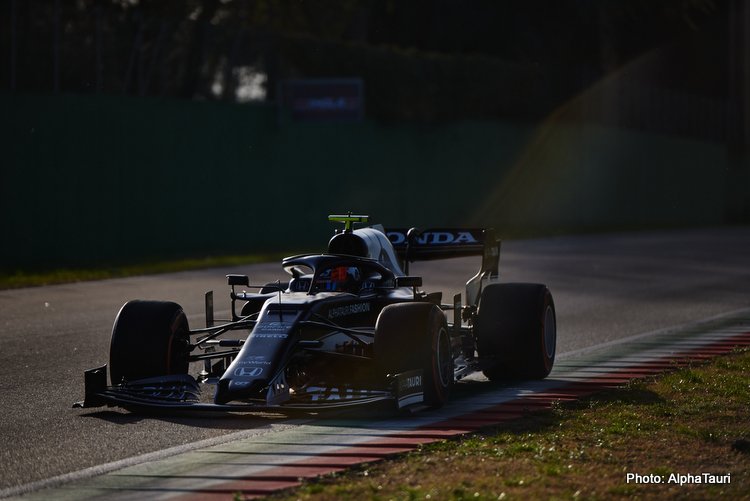 Pierre Gasly and Yuki Tsunoda have been out on track at Imola this week in the new AlphaTauri 2021 Formula 1 car, the AT02.

AlphaTauri unveiled their latest challenger from their new showroom in Salzburg, Austria, last week and began the shakedown at Imola on Tuesday, completing further running on Wednesday.

According to Motorsport.com, the team used the shakedown as an opportunity to test out its new nose, which they spent their two development tokens on redefining over the off-season.

The new nose was not featured on the launch car, with AlphaTauri bosses waiting until this week at Imola to unveil the new part.

The Faenza-based outfit enjoyed an excellent 2020 season, with Gasly taking a historic Italian Grand Prix win at Monza, the team’s first since Sebastian Vettel triumphed at the same circuit in 2008.

Gasly will be joined by a new teammate for the 2021 season though, Japanese youngster Tsunoda. Tsunoda was one of the outstanding performers in F2 last year, finishing third in the drivers’ standings behind only Callum Ilott and champion Mick Schumacher and earning three race wins in the process.

The 20-year-old replaces Daniil Kvyat, who ended his third spell at the team in Abu Dhabi, two years after making his comeback to the sport.

Whether the Red Bull junior outfit can build on their seventh-place finish in the constructors’ championship from a year ago remains to be seen, but team principal Franz Tost has identified clear areas for improvement.

“We had a reasonably good season in our first year as Scuderia AlphaTauri and we improved in many aspects,” he said following the AT02 launch last week. “The aerodynamic side has made good steps in the right direction but also the design office enhanced all procedures to smoothen the workflow and achieve targets better and quicker. On the operational side, we have again made a big step forward and had very fast pitstops, which helped us to achieve quite good results throughout the year. Thanks to all this work we could achieve the highlight of our season in Monza, with Pierre Gasly’s maiden victory.

“Nevertheless, I can’t forget that we retired four times, three of them due to reliability issues and once because of an accident Pierre was involved in, which means we missed four opportunities to score points. We definitely have to avoid finding ourselves in certain situations, so there is still some work to do ahead of us but the team is focussing on this to prepare in the best possible way for the new season. I hope that the new car will be as good as we expect it to be, because if our drivers get a competitive car I think we can have an even better season this year.”

told you it looks hot 🔥 pic.twitter.com/ZiTjOlSi7u