Tost: Yuki can learn a lot from Pierre in all aspects 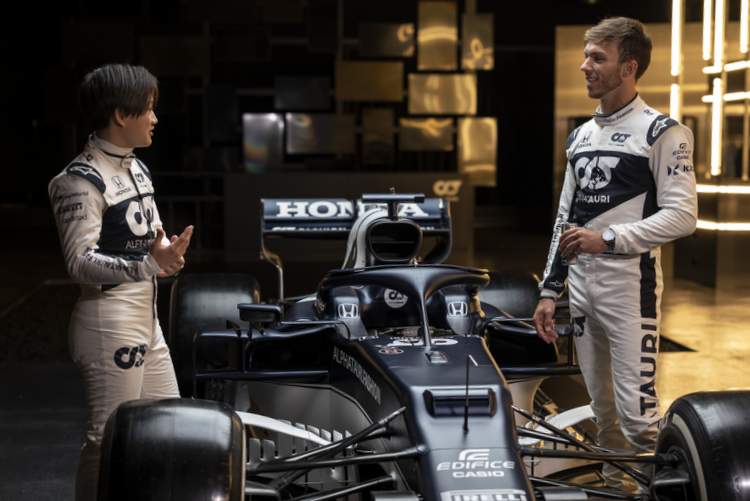 AlphaTauri embark on their second year of existence, since morphing from Toro Rosso at the start of last year, with an exciting driver line-up with good prospects for the Formula 1 season ahead.

In Pierre Gasly they have experience and a race winner in one car, with promising rookie Yuki Tsunoda in the other; they have Honda for another year before Red Bull takes the PU operation inhouse and Japanese manufacturer depart.

Nevertheless, developments are heading in a positive direction. On the occasion of their 2021 launch, team principal Franz Tost looks ahead to the season while considering these factors.

How was the first year of collaboration with AlphaTauri?

Franz Tost: “We have a fantastic relationship with AlphaTauri and we cooperate very closely. Our philosophies are quite similar, namely to strive for functionality and innovation. At Scuderia AlphaTauri we pay a lot of attention to the development of the car, always aiming for high technology and innovation. This means constantly researching new ways to improve, something AlphaTauri also does with their products. Our way of thinking is very similar, which makes our teamwork really easy.”

The first year as Scuderia AlphaTauri has been a good one: highest number of points ever, a record of 10 races in a row in the points and we have scored in 15 out of the 17 races last season. Even if the team was aiming for a higher final position in the Constructors Championship, are you satisfied and ready for more?

FT: “We had a reasonably good season in our first year as Scuderia AlphaTauri and we improved in many aspects. The aerodynamic side has made good steps in the right direction but also the design office enhanced all procedures to smoothen the workflow and achieve targets better and quicker. On the operational side, we have again made a big step forward and had very fast pitstops, which helped us to achieve quite good results throughout the year. Thanks to all this work we could achieve the highlight of our season in Monza, with Pierre Gasly’s maiden victory.

“Nevertheless, I can’t forget that we retired four times, three of them due to reliability issues and once because of an accident Pierre was involved in, which means we missed four opportunities to score points. We definitely have to avoid finding ourselves in certain situations, so there is still some work to do ahead of us but the team is focussing on this to prepare in the best possible way for the new season. I hope that the new car will be as good as we expect it to be, because if our drivers get a competitive car I think we can have an even better season this year.”

Talking about drivers, this year you will have an experienced one in Pierre Gasly, who won a race and knows the team’s dynamics very well, and a complete rookie in Yuki Tsunoda, who made it to F1 after only one year in F2, who’s got a lot to learn. Why has it been decided to go for this line-up?

FT: “For this season we are running an interesting driver pairing. We have an experienced driver and a rookie. I reckon Pierre is one of the strongest drivers in F1 nowadays. Pierre’s good technical understanding allows him to get the best out of the car. Pierre has been with the team for some time now, so he is familiar with all procedures and with our way of working, he will be a good leader, helping Yuki in his development.

“He knows how to win a race – as he proved last year in Monza – and if we provide him with a competitive car, I expect him to be very successful this season. Then, we have Yuki, who finished third in the F2 Championship and watching his races last year in F2 I must say he did a fantastic job, winning races and carrying out many impressive overtaking manoeuvres. Yuki has already completed some tests with us in an F1 car and I’m convinced that he will have a successful start in his F1 career, due to his natural speed and his talent.”

“The decision to go for Pierre and Yuki in 2021 was taken because Scuderia AlphaTauri’s philosophy is still to give talented young drivers from the Red Bull Junior Programme the opportunity to step up to F1 and to educate them – this is why Yuki now gets his chance. With Pierre on Yuki’s side we have an experienced driver, who can help our Japanese rookie to develop faster, but at the same time we can aim for good results. I think this pair is the best possible scenario to achieve both our targets and I’m also confident this will be a successful one.”

Why Yuki and how can he benefit from having Pierre as a team-mate?

FT: “Pierre is a very high skilled driver and he now also has the necessary experience to be a leader in the team and for Yuki. Every driver compares themselves with their teammate so the better the latter is, the more you are pushed to improve yourself.

“Yuki can learn a lot from Pierre in all aspects, for example comparing the lap times, the set-up of the car, the driving lines – this is all very important, especially on those tracks that are new to Yuki. If you have a strong and experienced teammate you can compare many different parameters, which help to improve your own performance.”

“When he was driving in the Japanese F4 Championship he was selected by Honda, who supported him. In 2019 he also became a Red Bull Junior driver. He moved to Europe to compete in the F3 Championship and in 2020 he was running in the F2 series. We expect his learning curve to be quite steep, so he should be able to achieve a good performance quite quickly.

“Of course, he will have some crashes, that’s part of the development programme, but what is very extraordinary on his side is the car control, his strength on the braking and his speed in fast corners. If he continues his learning process, like he did at the tests in Imola and Abu Dhabi last year, I’m sure we will see some fantastic races.”

This is going to be Honda’s last year in F1. Can you please tell us about their development so far and your expectations for this year?

FT: “It’s a shame that Honda stops at the end of this year because the engineers in Sakura did a fantastic job over the past years and currently the Honda Power Unit has reached a really high level of competitiveness, while also being reliable. This year we get a further development of Honda’s PU and I expect that this will also improve the performance of both Scuderia AlphaTauri and Red Bull Racing.”

It has now been announced that Red Bull Powertrains Limited will take over the Power Unit technology from Honda at the beginning of 2022. What does this mean for Scuderia AlphaTauri moving forward?

FT: “Honda has invested tirelessly and intensively in hybrid technology to achieve a highly competitive Power Unit, our relationship has always been both very efficient and enjoyable, and that’s why their decision to pull out at the end of 2021 was quite disappointing for the team. Today, we are very pleased to hear that this cooperation will not end, as from the beginning of 2022 we’ll continue using Honda

“Power Unit technology through the newborn Red Bull Powertrains Limited. I would like to thank the FIA and Formula 1 Management, together with all the teams, for having unanimously agreed on the engine freeze from the start of next year, which has enabled this agreement to be reached.

“We believe this is the best solution for the future of both Scuderia AlphaTauri and Red Bull Racing, until the next generation engines are introduced in 2025. It’s also a great incentive to achieve the best possible results in Honda’s last season in the sport.”

Is there anything else you would like to say?

FT: “In 2020 Scuderia AlphaTauri was a midfield team, we were fighting successfully against the other teams like McLaren, Renault and Racing Point but our target for this year is to consistently be at the top of this midfield pack and to improve further. To achieve this, we have to avoid reliability issues and finish all races in the points.

“This can only happen if we do not make any mistakes, so we have to be 100% concentrated on our job, race after race, on and off the track, because our competitors are hard to fight.

“We will do our best to provide a good show for all the F1 fans, who I hope to see back at the track filling the grandstands soon, and for our partners, who continue to believe in us: Red Bull, AlphaTauri, Honda, MyWorld, Casio Edifice, Randstad and RDS – to mention a few – deserve this from us.”