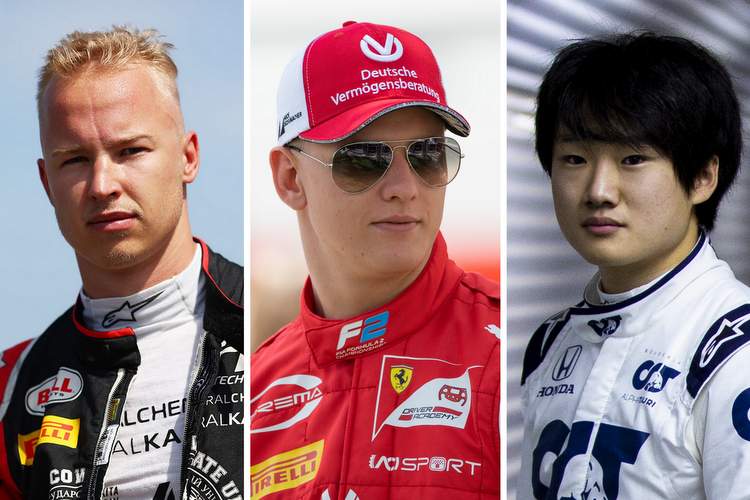 AlphaTauri team principal Franz Tost knows a thing or two about rookies, tasked to develop Red Bull young since the Italy-based team morphed from Minardi to Toro Rosso in 2006.

The Austrian and his outfit groomed the likes of Sebastian Vettel, Daniel Ricciardo, Jean-Eric Vergne, Sebastien Buemi, Max Verstappen and the gaggle of drivers connected to the development programme headed by Helmut Marko.

So who better to tap into for his predictions for the three young guns set to enter Formula 1 this season, than Tost, who spoke his mind in an interview with Auto Motor und Sport.

Mick Schumacher, Yuki Tsunoda and Nikita Mazepin are stepping up from Formula 2; the first of the trio, the reigning F2 champion whose ladder to the top flight also saw him win the F3 Championship in his second year.

For those feats alone young Schumi deserves a seat on the grid this year, but apart from that, he is F1’s crown jewel, prince son of legend Michael Schumacher. By default the 21-year-old German has a big following in his camp and with that comes the weight of expectation.

Tost said of Schumacher junior: “Mick is not the type of driver who gets into a car and immediately risks everything. He takes it step-by-step and makes sure that he has everything under control in order to then strike properly.

“With young drivers it often happens that they get into the Formula 1 car and don’t even know what is happening to them. Mick is a driver who first looks at everything and then continues to learn. There are others who are insane fast, but don’t know why.

“It is important that you take one step at a time and always retrieve what you have learned. Mick does that really well. That is why I am firmly convinced that he will hit Formula 1,” declared Tost.

Tsunoda will be directly under Tost’s care as he embarks on his first steps in F1 and already knows Japanese driver, the 20-year-old put through an intensive winter testing programme with a two-year-old F1 car.

The team boss observed: “I noticed positive things about him in Formula 3 already. You have to note he came from Japan and didn’t know any track here. The way of life in Europe is very different. It’s a real culture shock. How he shook it off, concentrated on racing and delivered good results, was something special.

“We started a test program with him last year in Imola,” recalled Tost. “He found his way around the car surprisingly quickly and well. He was able to improve steadily, without spinning, without crashes. And at the beginning of this year we had one more time with him in Imola and Misano, where he reeled 1000 kilometres each. ”

“For me, the decisive factor is always how quickly a driver implements what he is told. That works ad hoc with Yuki. He knows immediately what to do, he is strong on the brakes and has a good feeling – especially in fast corners. If we have a competitive car it is sure to be good for a few surprises.

He also believes the up-and-coming new generation has depth in talent: “We are now getting some young drivers who are really super good. In addition to Mick and Yuki, there is also Robert Shwartzman. I think highly of these three drivers. This generation will determine the future of Formula 1,” prophesied Tost.

Finally, the black sheep of the family: Nikita Mazepin. The Russian hop-skipped-and-jumped over drivers far more talented and deserving than he is, simply by virtue of being the son of a billionaire petrolhead.

At 21 he steps up into F1, arguably the most despised driver ever which already puts him on the back foot. He will need to perform miracles to win over any supporters. The only way he can do that is by out-driving his fellow rookie and Haas teammate Schumacher.

Tost did no mince his words on his assessment of Mazepin: “I could of course get brutal again and say: You can’t make a tiger out of a cow! In the end, it always depends on how much of brain a driver has and what switches on in the cockpit.

“In my long time in motorsport, I have found that in the end, only intelligent drivers and know why they are doing certain things will prevail,” concluded Tost, suggesting he has little hope for Mazepin.

Whatever the case, the trio will be lining up at the season opener in Bahrain with the glare of the world upon them.

Tsunoda will be the first to be judged vis-a-vis his performance compared to Pierre Gasly who emerged from his greatest season ever last year. It will be a stern test for the rookie and one he has to pass.

Ferrari mysteriously opted to place Schumacher with Haas as opposed to Alfa Romeo. The American team led by Gunther Steiner have no history of grooming young drivers while the former Sauber team are veterans at it.

Thus it is Schumacher vs Mazepin with their measure up against their rivals dependent on the car Haas roll out for them this season. If last year was anything to go by, the two lads are doomed to battling each other and ticking the first box in a driver’s handbook to success: beat your teammate.

For now in a nutshell, Tost is predicting great things for Schumacher, is cautiously optimistic for Tsunoda and has few expectations of Mazepin. Time will tell if he is on the mark or not…