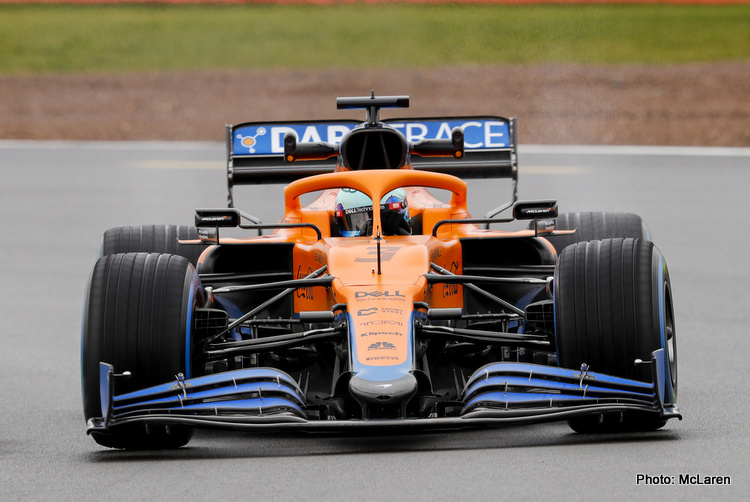 McLaren drivers Lando Norris and Daniel Ricciardo spent time getting to grips with the new MCL35M at Silverstone on Tuesday, as the team used up one of its allocated filming days.

The team unveiled their 2021 challenger at the MTC on Monday, before heading to the home of the British Grand Prix for its first run-out.

With McLaren having switched over to Mercedes engines, the car has undergone some significant changes compared to last season in order to integrate the new power-unit. This is despite the introduction of the new development token system by Formula 1.

Meanwhile, the sport made a tweak to the regulations in a bid to reduce downforce levels, although there is a confidence that many of the losses will be recovered.

Speaking on Monday, technical director James Key said: “We’ve done this through a period where the cars were homologated last year, mechanically. A lot of the components involved in the engine installation were frozen at the beginning of last season when it eventually began so that obviously put us in a bit of a spot.

“But of course there were allowances for that and it meant that we had to undertake what is a very different installation. Every engine installation is really quite different, there’s no one solution on how these patents are laid out. All the sizing of various key components that affect the car’s architecture, so, what we needed to try and do is respect the homologation process by not only changing things that didn’t really need to change I suppose in line with installing the engine but clearly making the changes we needed to on homologated parts. So that allowed us to change the chassis which of course has to change with a new engine and the energy store aspects of the gearbox for packaging purposes but after that, it’s all identical to last year.”

Pre-season testing will begin on March 12 in Bahrain.