Alan Dent updates us on the Miracle in Bahrain project 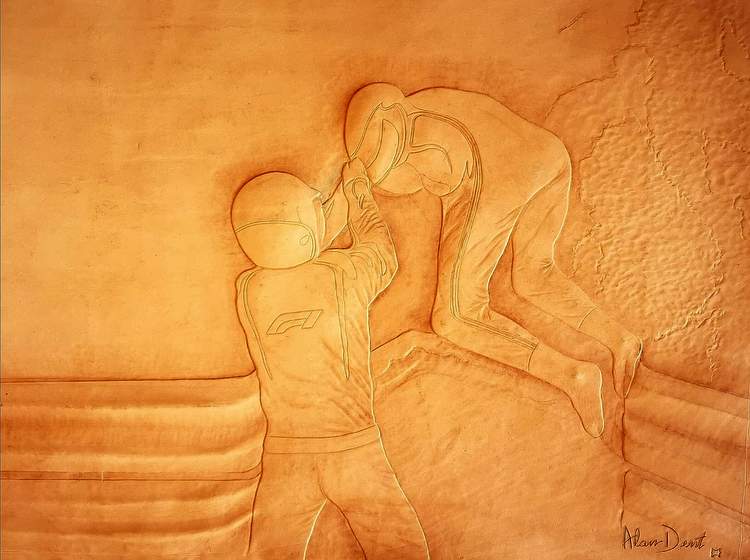 Alan Dent has spent most of February working on an art piece triggered by Romain Grosjean’s fiery crash on the opening lap of the Bahrain Grand Prix last year.

The incident received widespread coverage that transcended Formula 1 on a night, irrespective of beliefs, in which the world witnessed a miracle. As a result, motorsport safety shone as did the bravery of safety and medical crews on what might have been a dark night,

Instead, we were able to rejoice collectively as Romain crawled to safety and into the hands of his saviours. The incident moved people from all quarters, the driver himself calling it “a night of several miracles” afterwards.

One of those enraptured by those daunting moments of uncertainty was South African artist Alan who was immediately inspired to immortalise the moment with his gift and unique style.

After reporting of his intent last month and fascinated by this call to duty, we tapped up Alan to give us an update on the project to find he is deeply immersed in this labour of love.

Here is an update Q&A with Alan:

How far has the artwork progressed?
Alan Dent: The project has proceeded well and is about 80% complete. All the main elements, ie., Romain jumping off the barrier, Dr Thomas, the crash barriers, the fire and the background have now been largely established.

What are the challenges working with such a complex project?
Alan: Actually, the challenges have been somewhat more substantial than I first envisioned when I decided to produce this project. For example:

Realistically capturing the intensity of the fire engulfing Romain. Given the fact that the fire was composed from highly volatile F1 racing fuel it and that the accident had happened at night it was an extremely intense image. I had to source an additional especially deep yellow colour from my supplier to capture the image as accurately as possible.

Also capturing the subtle glow of the fire reflecting off the dark uniforms and helmets of Romain and Dr Roberts proved quite difficult.

I mostly use a dry- brush technique where light layers of paint are laid down with an almost dry brush. These underlayers are vitally important to the effect of the finished work.

During the early stages I have to trust the process and work through the early “awkward” parts knowing that the final effect will work out. Romain’s uniform and the upper background for example are composed of about 8-9  layers of paint.

Finally, there are quite a number of logos and words on the back of the doctor’s helmet and overalls. These required very fine detailing of the leather modelling and also I needed extra small art brushes when colouring the work. 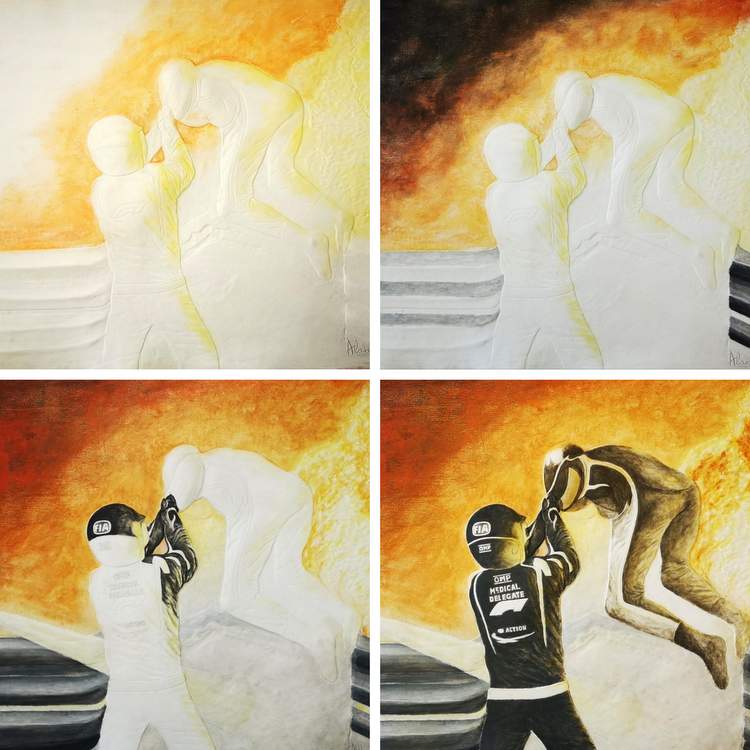 What remains to be done?
Alan: Work is progressing on moving all the components of the project to completion which should occur by the end of next week.

The last 5% of the painting work is where the “magic” has to occur to realistically capture the drama of the situation that Romain had found himself in.

This is where an enormous amount of fine-tuning takes place. Literally, one or two small brush strokes can have a substantial impact on the work.

What are your intentions with the work once it is completed?
Alan: The eventual plans for the work have not been finally established as yet – except to state that the work will definitely not be sold – for a number of reasons.

I believe that Romain’s survival of the crash and rescue from the fire was a seminal moment in the history of Formula One, validating the FIA’s firm – but very unpopular stance at that time  – on introducing the Halo to Grand Prix racing, without which there would have been a very different story being told about this accident.

Also as a youngster I was at Kyalami and watched my hero Jim Clark win his last Grand Prix in 1968 and I was totally shocked at his death from his horrific accident just a few months later at Hockenheim.

Finally over 40 years ago I used to work with a gentleman by the name of Bruce van der Merwe who was quite an accomplished racing driver having driven in the Kyalami 9 Hour and in the South African Formula 1 Series.

Bruce later had a son, Alan, who went on to win the British Formula 3 championship in 2003. And it was Alan van der Merwe who was the driver of the medical car that arrived a few seconds after Romain’s accident to assist with his rescue.

Grand Prix racing has provided me with enormous pleasure for many years and this is will be my contribution to, in some small way, say thank you to Formula One for all the pleasure and excitement over more than five decades and to celebrate the fact that, in one of the worst accidents in the history of F1, that it did in fact have a very happy ending.