Wolff: An important contract, but young drivers are the future 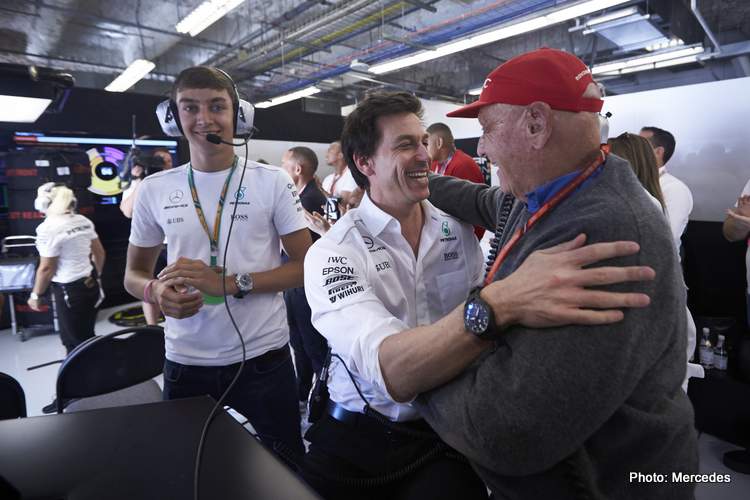 Lewis Hamilton’s new Formula 1 deal has ended speculation about his plans for this season but the one-year duration raises questions about how long the seven times world champion will stick around.

All of the 36-year-old Mercedes driver’s previous deals have been multi-year agreements but a shorter one buys time for both sides while other issues are worked through.

The debate is likely to continue for months to come, just as the last contract saga was a hot topic throughout much of last year.

“It´s an unusual announcement for such a team and such a driver it must be said,” said former driver and Sky television commentator Martin Brundle.

“Clearly at least one of the parties wanted to keep their options open going forward. I suspect that was Mercedes-Benz, and so they put it to bed for this year, and then they are saying that they will sort 2022 out somewhat earlier.”

Hamilton will be favourite for an unprecedented eighth crown, and a record-extending 100th win, this year but his future will remain in focus.

Team boss Toto Wolff acknowledged that on Monday after Mercedes announced the Briton, who was out of contract, had agreed an extension to take him into a ninth season with the team.

“It is an important contract,” said the Austrian. “It is important because of this season and how we want to position ourselves from 2022 onwards and how is his thinking.”

“Lewis needs to decide what his future holds for him,” he added.

“The team needs to decide in the long term what we want to do about drivers.”

Finland’s Valtteri Bottas is out of contract at the end of 2021 and significant rule changes for 2022 could see a shake-up on track.

Mercedes are also the only team with two drivers over the age of 30.

“Young drivers are the future therefore we need to consider how we want to set ourselves up for the years beyond,” said Wolff.

The Austrian has long been a fan of Red Bull’s Max Verstappen, under contract to the end of 2023, but Mercedes also have Britain’s George Russell, the 2019 F2 champion, on their books and in the last year of his contract at Williams.

Russell, 22, was an impressive stand-in for Hamilton in Bahrain last year after the champion tested positive for COVID-19 and is familiar with the team’s workings.

Wolff indicated that whatever Hamilton decides, the relationship with the sport’s most successful driver of all time would continue long-term on another level.

Hamilton and Mercedes also announced on Monday plans for a joint foundation dedicated to diversity and inclusion in the sport.

“The idea of the foundation, credit where credit is due, came from (Daimler head) Ola Kaellenius, when we discussed between Lewis, Ola and myself,” said Wolff.

“We are going to run it jointly. It also shows there is an alliance and a relationship much beyond 2021.”

The season starts in Bahrain on March 28.