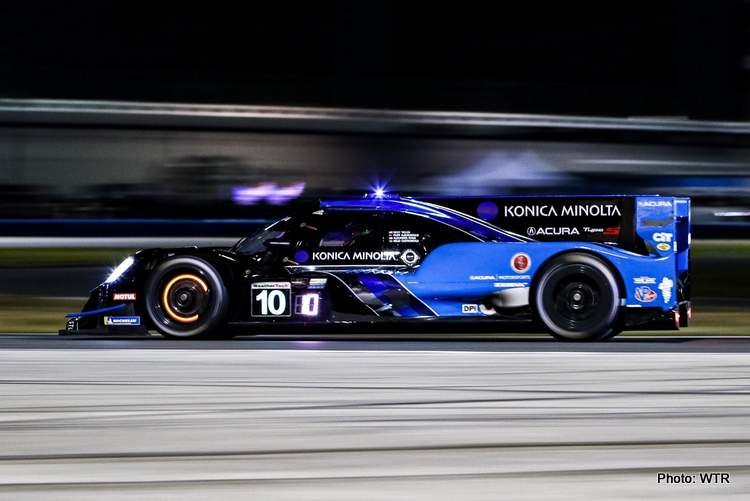 The tight contest for the overall lead of the 2021 Rolex 24 At Daytona was as spirited as predicted 12 hours into the IMSA WeatherTech SportsCar Championship season opener as it was at the drop of the green flag.

And at the midpoint of the race, a familiar name was showing the way.

The top five Daytona Prototype international (DPi) were still on the lead lap – within 40 seconds of the lead in one of the most competitive runs in Rolex 24 history.

The midpoint of the Rolex 24 also served as the second juncture for points to be awarded for the IMSA Michelin Endurance Cup that rewards top performers at designated stages of the four endurance races on the WeatherTech Championship schedule.

After a spate of early full-course cautions – four in the race’s opening three hours – the drivers settled in and there were but two yellow flags over the next nine hours. Only three of the 49 entries – all in LMP2 – had retired from the race.

@AlbuquerqueFil pits from the lead for new rubber and a full tank of fuel.

The following are other highlight notes from Hours 6-12, by class:

Jimmie Johnson pulled a double stint in the No. 48 Ally Racing Cadillac just after midnight. Taking over the car after co-driver Kamui Kobayashi pushed it into the overall lead, the seven-time NASCAR Cup Series champion held the point over his first fuel run but fell behind Renger van der Zande in the No. 01 Chip Ganassi Racing Cadillac on his second stint.

The No. 5 Mustang Sampling/JDC-Miller MotorSports Cadillac, with Tristan Vautier aboard, fell from contention after tangling with Patrick Long in the No. 16 Wright Motorsports Porsche 911 GT3R GTD entry shortly before 1 a.m. The collision happened as the cars were about to head into the infield section of the road course.

The No. 5 had been on the lead lap all race long. Vautier immediately pulled the car behind the wall and into the garage, where it remained for nearly 90 minutes as the crew repaired the damage. By then it was 47 laps off the pace.

It took Helio Castroneves more than two decades of professional racing to earn his first season title, coming in the 2020 WeatherTech Championship with Ricky Taylor. But now that he’s only slated to drive in one series race this year, the Rolex 24, the Brazilian is intent on enjoying the moment – no matter how short the duration.

“This is the first time that I come back as defending champ,” Castroneves said after his first race stint in the No. 10 Konica Minolta Acura he’s sharing with Taylor, Albuquerque and Alexander Rossi. “It was really cool. I was talking with Ricky about that. It’s a pretty good feeling.”

Taylor will carry that honor all year since he is a full-season driver in the No. 10. For Castroneves, this was his only opportunity since he returns to the IndyCar Series in April.

Cetilar Racing, fielding the only Dallara chassis in the LMP2 field, charged into the class lead following a restart from a full-course caution with 13.5 hours remaining. The No. 47 Cetilar entry, featuring four Italian drivers, lurked in the shadows in the earlier hours until shooting past the front-running No. 8 Tower Motorsport ORECA LMP2 07 and No. 11 WIN Autosport ORECA that had dominated to that point.

The comeback story of the first half of the race was the No. 6 Muehlner Motorsports America Duqueine M30-D08. After pitting with apparent suspension damage less than 20 minutes into the race, the No. 6 that started first in LMP3 dropped as many as four laps off the pace in class.

Co-drivers Moritz Kranz, Laurents Hoerr, Kenton Koch and Stevan McAleer methodically moved the No. 6 back into contention, taking the LMP3 lead by the seventh hour and contending with the No. 74 Ligier JS P320 for the class lead. After 12 hours, the No. 74 Ligier held the point over the No. 6 Muehlner Motorsports America entry.

Five GTLM cars remained on the lead lap after 12 hours, but it was the Corvette Racing duo doing the leading. The team is trying to get back to Victory Lane at the Rolex 24 for the first time since 2016 and give the Corvette C8.R its first endurance race win.

At the race’s midpoint, the No. 4 Corvette driven by Nick Tandy held 5.894-second lead over the No. 3 Corvette being driven by Jordan Taylor.

“It’s going fairly well so far, I would say,” said Alexander Sims, co-driver of the No. 4 Corvette that’s led most of the laps. “I had my first two stints in the Corvette at Daytona, and I feel like I’m learning a lot still. Those were the first two full stints I’ve done, and I learned a lot about the evolution of the car over that stint.

“So we’re at the front of the field. It may look like it’s all under control, but we’re pushing hard and not leaving much on the table. We’re in the right position at the moment.”

The long periods of green-flag running proved most beneficial for the Mercedes-AMG and Ferrari runners in GTD. The No. 21 AF Corse Ferrari 488 GT3 held strong to the class lead for a lengthy stretch, until the full-course caution with 13.5 hours to go.

On the restart, however, Maro Engel in the No. 57 Winward Racing Mercedes-AMG GT3 and Mikael Grenier in the No. 75 Sun Energy 1 Mercedes quickly pulled ahead of the Ferrari and into the top two GTD spots. The battle for position remained tight between the two makes and Ferrari driver Daniel Serra was able to split the two Mercedes and move into second place just before the race’s midpoint. (Report: Holly Cain/IMSA)