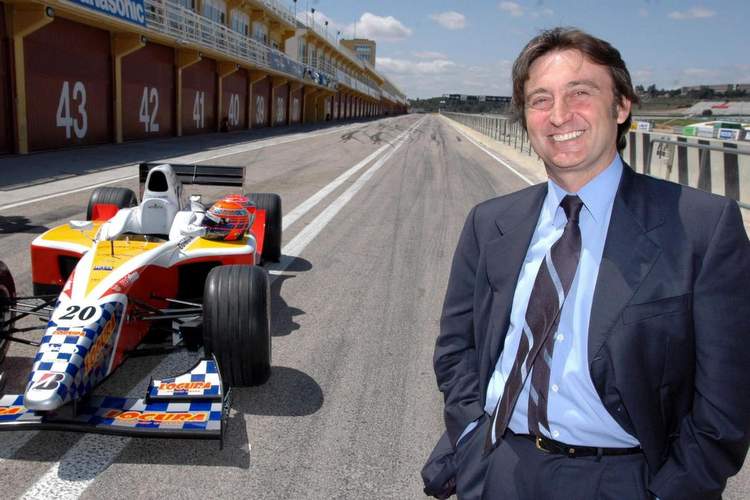 “It is with great sadness that Campos Racing regrets to inform that Adrian Campos Suñer, founder and Chairman of the team, has sadly passed away today as a consequence of a sudden coronary disease.

“The whole Campos family and racing team feel his terrible loss, but also the immense privilege to have worked alongside a man as courageous and innovative as Adrian.

“Motorsport was the way of life of Adrian: his determination and human quality will forever be the model and reference for each and everyone of us. His legacy in the motorsport community is enormous, and both his family and his team will always protect it.”

Adrian enjoyed a long and fruitful career in motorsport at all levels, playing the role of driver, team manager and driver´s manager, becoming one of the most respected and charismatic international personalities of the motorsport scene.

Below is a snapshot of his amazing journey and racing accomplishments

1986: F-3000 for Lola Factory and TYRREL F1 test driver
In 1986 he tried his luck in the F-3000, where Adrián landed a contract with the team Lola Cars Factory for the last two races of the championship. He won its first results finishing in the points on the last race in the circuit of Jarama. In parallel, the Tyrrell Formula 1 team offered him a contract as test driver.

1987 – 1988: Formula 1 with Minardi
In 1987 Adrián Campos joined the Formula 1 world with Minardi, being the first Spanish driver to compete in F1. He continued in 1988, before deciding to leave the category mid-season frustrated by a car that never allowed shining because of its extreme mechanical fragility and lack of performance.

1994 – 1997: Alfa Romeo Champ & 24 Hours of Le Mans for Ferrari
After a short period without competing, Adrián returned to the tracks, this time in the Touring Cars Spanish Championship (CET), becoming champion in 1994 as official Alfa Romeo driver. In 1997 he finished his racing career contesting the 24 Hours of Le Mans with a prototype Ferrari 333SP. That’s when Campos decided to return to the project suspended in 1983 to form his own team. Campos Racing was born in 1997.

The sudden passing of an apparently fit and healthy Adrian shocked the motorsport fraternity on Thursday morning, triggering an outpouring of condolences on social media:

We’re all so shocked and saddened to hear of the passing of Adrian Campos, former #F1 driver with Minardi and team principal of @CamposRacing in @FIA_F2. A friend and a true gentleman, yet always a competitive racer, he is gone far too soon. Descanse en paz, amigo. pic.twitter.com/WIZeBSl9ZC

Driver, team owner, talent scout, but above all, someone who loved motorsport. RIP Adrian.#AdrianCampos pic.twitter.com/Xt3ew35mAJ

As a driver and then founder and president of Campos Racing, Adrian leaves an incredible legacy in motorsport

We send our condolences to his family and friends, and all at @CamposRacing pic.twitter.com/XEEeObfPwI