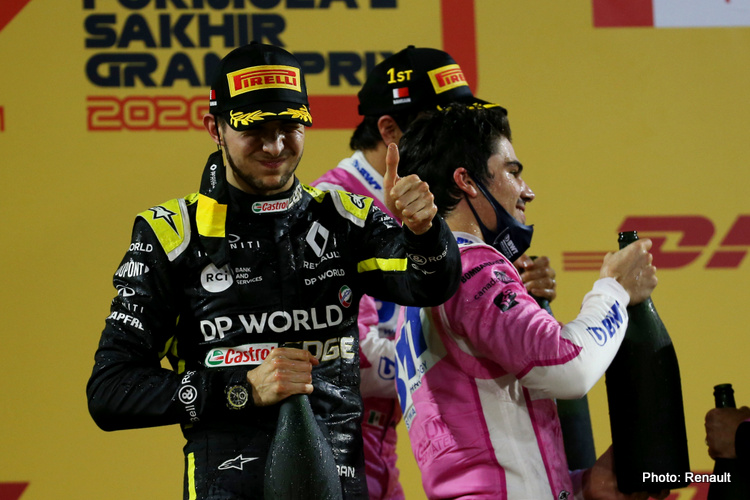 Esteban Ocon believes Renault were within touching distance of a “very strong” car by the end of the 2020 Formula 1 season.

The Frenchman returned to F1 last year after spending a season on the sidelines and struggled to get up to speed initially.

However, he made progress as the campaign went on, finishing 12th in the drivers’ championship and securing his maiden podium at the Sakhir Grand Prix.

Ocon will partner Fernando Alonso in 2021, with the Spaniard replacing the outgoing Daniel Ricciardo, while Renault will rebadge as Alpine.

Discussing his development across the year, Ocon said that as he became more comfortable in the car, he was able to experiment more with setup and balance.

“We were experimenting more and more on my side than we were earlier in the year,” he said, as reported by Motorsport.com. “Early on, I was trying to sort my driving out, and sort everything I was doing on track.

“And unfortunately in Formula 1, you gain more time by working closer with your engineers and working more on the car because, in the end, that’s going to give you the confidence. The driving is then going to come with it.

“In the end, I feel that we did that a lot better later in the year, and I was happier with the car. I was the happiest with the car in Bahrain 1 than I was the whole season.

“That’s where the car felt very strong. I think we were touching with the finger on something, and it was definitely the right way and the right progression.”

Prior to arriving at Enstone, Ocon had driven in F1 with Manor and Force India, while also acting as a Mercedes test driver, and admitted that driving the Renault was a different experience.

“Overall the car doesn’t work the same as the Mercedes does, like I drove in testing, or the Force India,” he added.

“They are not the same and don’t have the same characteristics.

“You don’t take the corner the same way, it’s a little bit different. The way of approaching and the way of tuning the car, it’s not the same.

“So I’ve had to relearn stuff that I thought was already there. I thought I was going to come back and do the same way as I was doing in Force India, and, you know, get the car sorted for me. But it’s not the case.