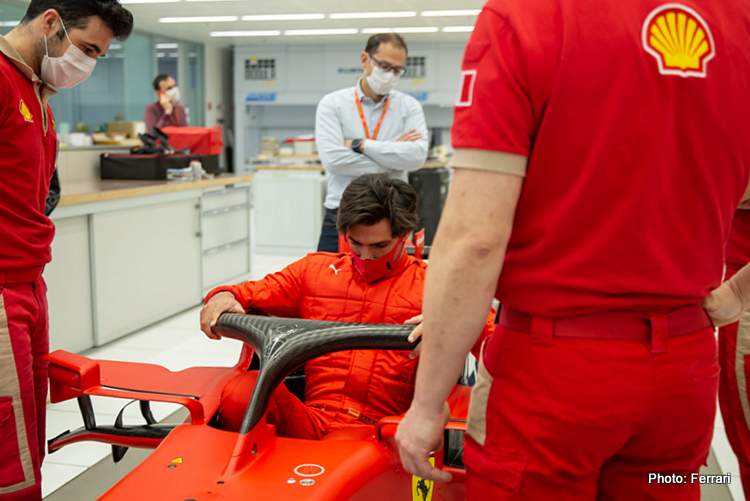 Late last week Carlos Sainz’s career as a Ferrari driver began in earnest with a full day at Maranello where he did simulator work, met more team personnel ahead of a test later at Fiorano in a two-year-old car.

In May last year, the Formula 1 world learnt that Ferrari decided to ditch Sebastian Vettel and replace him with Carlos. Much has happened since then, with McLaren beating Ferrari in the championship.

Nevertheless, it is every drivers’ dream to don the red race suits of the Scuderia and now Carlos’ time has come to be the 96th driver for the legendary team.

“Finally I’m here,” he said in a Twitter video. “Finally to start working properly with all the engineers, with all the people here. I’m meeting a lot of new faces, new names; it’s going to be tough for me to learn everyone’s name but I’m getting there.

“I had six hours of meetings. and it’s very encouraging to see people working flat-out for this year. For the first time, I am jumping in the simulator and starting to give some feedback, working hard already for this season.”

Carlos arrives at Ferrari to team up with their homegrown 23-year-old star Charles Leclerc, making it the youngest driver line-up the Scuderia has had since the sixties, while the glorious team has slumped to their worst level since around that time too.

Banking on youth, Binotto is adamant that the drivers are free to fight it out until they are not. But before they square-up the priority is to motivate the team in this time of crisis.

Notably, last year Charles was stellar for the Reds but the dog of a car forced him to overdrive it and hence mistakes were made; even worse for teammate Sebastian Vettel who never got to grips with SF1000, because it was simply so bad.

On the other hand, Carlos is no stranger to teams in distress, and arrives fired up after helping lead McLaren to third in the F1 constructors’ championship last year; the Woking outfit recovering from their own low.

However, at Ferrari the spotlight will be far more intense and relentless as they engineer a way back to the front of the grid, looking to the Madridista to sprinkle some of the magic he took to McLaren and spread it around Maranello.

Later this month, Carlos will test at Fiorano using the Ferrari SF71H campaigned during the 2018 Formula 1 season by Vettel and Kimi Raikkonen.