Inside Line: Why the 2021 F1 calendar will remain fluid all year 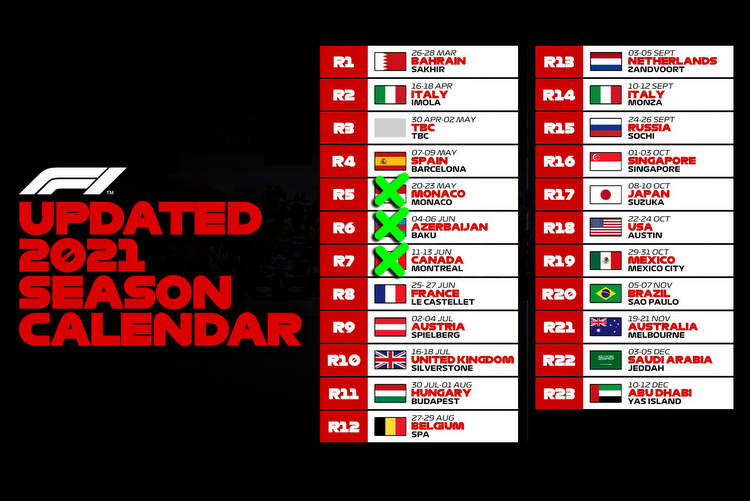 The start 2021 Formula 1 season is a couple of months away and already the current COVID-19 landscape is tearing up well-laid plans.

Already the Australian Grand Prix has been postponed to November, which means the season opener is scheduled for Bahrain.

But plans face further disarray with some races likely to fall off the calendar according to a report in Formule1. However, this is not confirmed and has been dispelled by certain media outlets

Citing various sources they write: “the GPs of Monaco, Azerbaijan and Canada would announce next month that they are forced to skip another year.”

The 2021 F1 calendar, initially crammed with 23 Grand Prix race weekends, has already changed with above-mentioned changes as well as the Chinese Grand Prix dropping off the calendar due to coronavirus restrictions.

Portimão will be the replacement stop for Shanghai but according to FIA president Jean Todt, these changes will not stop there. According to insiders, the Monaco Grand Prix (May 23), Azerbaijan (June 6) and Canada (June 13) are set to be axed too as they were in 2020.

An official announcement to this effect is expected next month

Street circuits are particularly vulnerable in these times as the manpower to set up the cities for race events face health risks, making mounting the temporary arenas impossible. Thus it is only a matter of time for Singapore to appear on the ‘potential drop-off’ list.

After the strict anti-coronavirus measures in place in France, the Automobile Club de Monaco (ACM) cancelled the 2021 running of the historic Monte-Carlo Rally this week, which was planned for the end of January in and around the principality.

Canada has closed its borders to foreigners for a while and has a very strict and strict corona policy. At the Circuit Gilles Villeneuve, just like in Monte-Carlo and Baku, needs to being the construction of the stands, paddock and hospitality early. Last year, the race in Montréal was permanently in early April.

Liberty Media was quick to find replacements for Australia and China with Imola and Portimão. Both circuits were also present on the revised calendar last year.

If Monaco, Azerbaijan and Canada are indeed cancelled, alternatives are also available. with Istanbul Park slotting in for Monaco Monaco at the end of May, with Mugello and Nürburgring as options for races in early June.

While the substitute races are a Plan-B for the sport, the reality is no plan is certain as coronavirus continues to do as it pleases with no predictions possible, nothing a certainty, as the pandemic can mushroom anywhere and at any time if the past twelve months are anything to go by.

Meanwhile, F1 are in denial, and reacted to the above report with the following statement:  “We have set out the details of the revised 2021 calendar and there are no other changes. The suggestion street races will not take place are completely wrong.”