Sainz: I only have positive things to say about Andreas Seidl 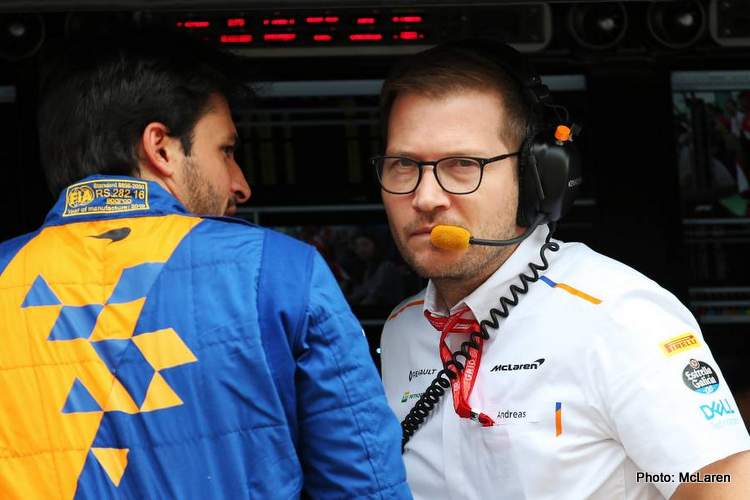 It could be argued that one of the best things to happen to Formula 1 is the arrival of Andreas Seidl at McLaren, brought in to steady the chaotic ship that Zak Brown had taken over.

Seidl was plucked from the ultra-successful Porsche World Endurance Championship, after his name-making stint as BMW DTM boss, leading them to championships in the premier German tin-top series.

This was his first foray into F1, and he make a serious impact.

He rid McLaren of the Fernando Alonso-factor that afflicted the operation in the wake of his “departure” and put the house in order.

Thereafter he proceeded to win the hearts and minds of everyone within the team, the F1 paddock, the media and, perhaps most important of all, developed a deep bond with his drivers.

Third in the 2020 F1 constructors championship was a reward for a team that spent far too long in the wilderness, with much credit going to the harmony and camaraderie between Lando Norris and Carlos Sainz.

The Spaniard departs for Ferrari but had some telling insight about working with Seidl, when asked to compare the McLaren F1 team principal to others he has worked with, Carlos replied, “I don’t like to compare people with one another.

“That’s neither fair nor good and can quickly get you into an uncomfortable situation. Andreas did a very good job for McLaren. You just have to look at the results and how far the team has come in the last 18 months in which he has worked for the team.

“I only have positive things to say about Andreas, I admire him and have learned a lot from him over the past few months, including about his management style.

“I would like to thank Andreas for that because as a driver you naturally always want to be praised by the boss. That’s always good. Andreas knows more than anyone how I work, how I approach the races and he also knows where I am strong.

“There is nothing better than when your boss, who follows every race closely, evaluates you. But I don’t know how to deal with the praise. My father [rally legend Carlos Sainz Senior] always says that praise only makes you weaker,” added Carlos junior.

Lando was equally enthused and motivated by Seidl, “He’s my first real team boss in Formula 1, so it’s difficult for me to compare him. He’s a very down-to-earth guy who understands the drivers and what they need which allows drivers to do their best.”

Seidl galvanised a team that went through huge changes at the end of the Ron Dennis era and was headless for a while until new CEO, Brown, settled in, took stock, weathered the critics, won over the board and made some wholesale changes at Woking.

The MTC building is the same, so are the iconic cars in the foyer but the McLaren of today is a far cry from the McLaren of five ago when the rot sunk in.

Seidl’s management style has worked well as Lando pointed out, “He involves us and everyone who needs to be involved and gets the best out of us. He’s a big part of it.”

While Carlos departs for Ferrari, McLaren welcomes Daniel Ricciardo in his place. The Australian having contact with Seidl before the German departed Porsche.

In 2014, there were talks recalled Daniel, “There was the idea that I could drive Le Mans with Porsche at the time. We had contact and talked about it.”

But that did not transpire at the time, nevertheless, the Aussie added, “I’m really looking forward to it. I’ve heard a lot of good things about him from people who have worked with him.”

Unlike Lando, Daniel has had his fair share of iconic characters in his corner during his career in the top-flight; at HRT he made his F1 debut under Colin Kolles, next up was Franz Tost at Toro Rosso, then Christian Horner and Helmut Marko at Red Bull and, the last two years, Cyril Abiteboul at Renault.

The 31-year-old from Perth continued, “There were a few strong characters there. I’ve learned from everyone and tried to benefit from them. Especially when you are young, you need experienced people around you to learn from them… like a sponge.”

Deniel’s arrival at Woking signals their intent, he is considered among the top three or four drivers of this generation and a proven race-winner.

With Mercedes-power and Seidl pulling the strings McLaren it would be safe to predict that they might just take the fight to Mercedes and Red Bull in 2021.