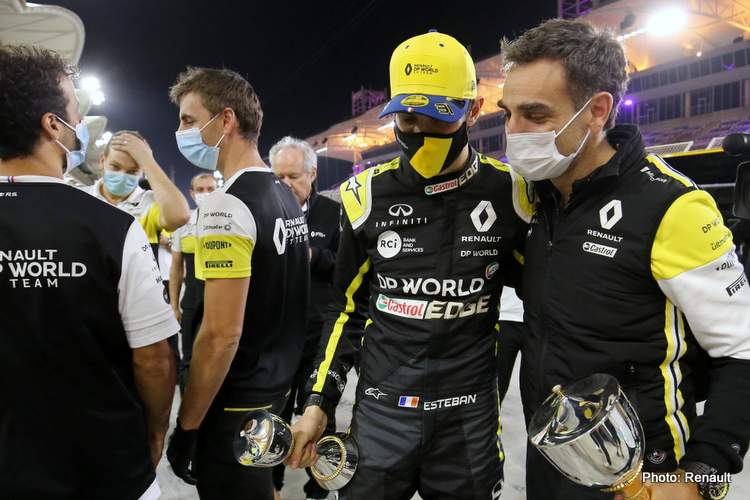 Esteban Ocon had an underwhelming 2020 season at Renault alongside Daniel Ricciardo, the Frenchman more often than not outshone by the Australian who has departed the team.

For 2021, Esteban remains with the team and welcomes double-F1 World Champion Fernando Alonso in the Alpine F1 Team garage.

Despite his so-so season, Esteban has revealed how he never felt pressured by his boss Cyril Abiteboul who will no longer be in his corner as he apparently was last year when the 24-year-old needed to raise his game.

He told Motorsport-Total: “I didn’t feel the pressure to get a result or to have to drive an incredible race or anything like that.”

The highlight of his year will no doubt be the second place on a dramatic night at Sakhir, a timely result which silenced the critics.

He recalled, “I talked to Cyril shortly before the race and he always supported me a lot even in difficult moments and was very positive.

“He always gave me good advice, and it is good when something like this comes from the boss just before you jump into the car. It means that you are relaxed and have self-confidence.

“We didn’t have a great qualifying [11th] but he came and said: Look, it’s going to be an interesting race and we have a good strategy up our sleeve. So you will have a strong race. Take your time, it will be fine run. Good luck.

“That was all he said, but that was really good for me and I hope that the team can now really say that they can rely on me in difficult moments.”

The result gave him breathing space in the off-season to recharge for the challenges of this year, “It is very important to be sure of your future, to have a stable mind and to know that you can build something with the team you are driving for.

“If you only have a little time, that’s not good. You don’t have the time to develop yourself further and to work properly with the people around you.”

Already ensconced in the team, after spending most of last year hovering in the background, Alonso is considered one of the best drivers of this era and returns to the top flight, after a two-year hiatus, fully pumped up to make up for lost time.

Coincidentally or not, as Fernando steps up to the plate with the organisation that took him two his two world titles. But right now the team is in flux, not only have they rebranded with the Alpine-A but also unexpectedly Cyril has departed while a posse of new high-profile hires have been lured to the team for this next chapter.

Esteban is acutely aware of the changes that make the team virtually unrecognisable not only from the livery side but also from a personnel side including his ‘new’ teammate, “We saw that it is not easy to change teams, even for people who have raced before. I also had a year off, so I had to get used to it and learn to work with a new team.

“I definitely want to do what Daniel did in his second year – namely take a step forward and continue the progress that we’ve made last year. That’s definitely the goal,” insisted Esteban.

Welcome @AlpineF1Team can’t wait to take the A521 on track for the first time 🔥😋 https://t.co/si627SaEER