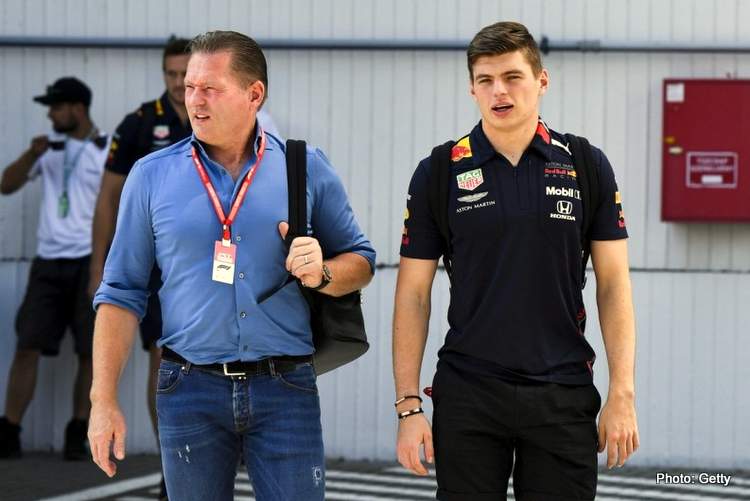 At the end of last season, David Coulthard hosted the Verstappens – Jos and Max – for an interview where they discussed their respective careers and compared the different eras.

The first question to Max was whether he would be able to adapt to the F1 cars driven by his father, who competed in F1 during the latter half of the nineties and in the early 2000s.

Comparing eras of any sport is always likely to spawn debate; would Juan Manuel Fangio or Jim Clark be any good in modern F1 cars? Or the reverse side of that question: How good would Lewis Hamilton or Max Verstappen be in an F1 car of the seventies?

Recalling his era in the top flight Jos ventured, “It was definitely more physical, for your arms and things like that. I think [the cars] were more nervous. We were fighting the car more because they were not so well balanced in those days.

“I sometimes had a very hard time. Brazil was for me the toughest: no power-steering, left-hand circuit… it was very difficult. Because the neck is tired, the shoulders are tired, I couldn’t even move after the race. Definitely more challenging in our time, it was tougher. But the G-forces they have today are higher.”

As for his son in the F1 cars he drove at the time, Jos was adamant, “Knowing Max, I think he would have adapted to the cars of our time.”

Max agreed, “To be honest, I think if you’re good you can adapt to any car. If it’s a F1 car or a GT car, you just have to adapt to the situation. And even now, when I started in 2015 to the car we have now, It’s quite different. Also, the way you were driving it was quite different but you adjust yourself to it.”

“Even in like F3, I never really struggled but for sure the power-steering helps a lot because it takes a lot of force away from the shoulders, and of course when the shoulders get tired, it’s going through your neck, so that helps.

“I also think the way of training my neck these days – you know I have this kind of harness; it seems like it’s very effective – that is working quite well.

“Some people just struggle more with their neck even if they train quite hard, it just depends on the length of your neck and of course how heavy your head is. It does make a difference, but luckily no issues there,” explained the younger Dutchman.

Jos pointed out other differences between generations in F1, “I didn’t have a trainer at home at the time, I was always relying on myself. It was definitely not as professional as the work they do today.”

The in-depth interview also delves into the father-son journey through the ultra-competitive world of karting. Their antics now part of karting legend. Jos sacrificing his racing career, he was well respected for his experience, was key to his son ending up where he is today.

But it was a tough journey and Jos was not shy to fling a wallop when his son did not deliver to expectations; the pair recalling an incident in which Max admitted to “driving like a potato” which did not go well with his father.

Jos took up the story, “I really smashed him on his helmet, bang! I say what are you doing? We’re here, it’s the world championships and I think we can win it…”

Max took over mimicking his dad, “Don’t drive normal. We go home, I pack up everything… All the mechanics around there were like, uh, what happened there?”

Upon which Jos pointed out how the youngster did that weekend, “Qualified first, won all the heats, pre-final and final.”

“Nice wake-up call,” concluded Max, who since then has etched his name as one of the great drivers of his generation, and that leg of the journey has only just begun for father and son.