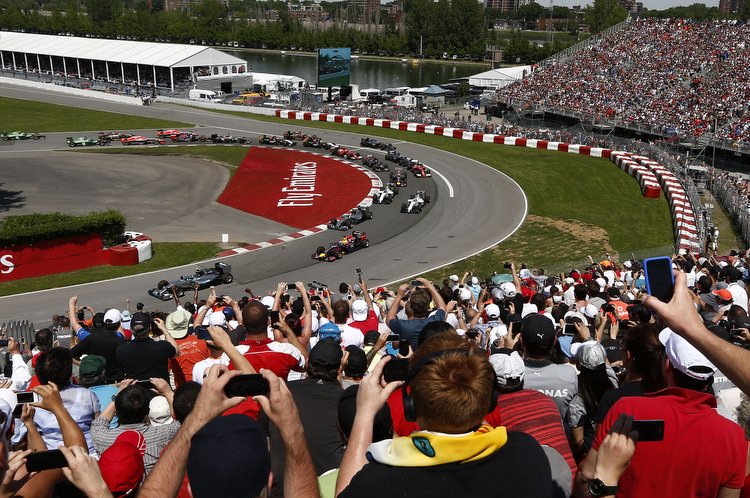 Hard done Canadian Formula 1 fans have started a petition to recover refunds promised to them by organisers when COVID-19 forced them to cancel the race in Montreal last year.

At the time they assured fans, who had already bought tickets, that refunds would be forthcoming if keeping the ticket for 2021 was not an option.

Nearly a year down the line, fans are still waiting for reimbursements, prompting Warren Liebmann to take-up the cause on change.org.

Here he outlines his grievance:

Following the news shared by Formula 1 last Friday, we regret to confirm that the 2020 Formula 1 Canadian Grand Prix, unfortunately, will not be presented.

Though it is difficult for us to accept this decision, we must comply. The health and safety of our employees, volunteers, partners, and of our faithful fans are and always will be our top priority.

We know how passionate and loyal you are to F1 and to the Formula 1 Canadian Grand Prix, which is why the seats you had reserved for 2020 have been transferred to 2021.

No further action is necessary to confirm you attendance at Circuit Gilles-Villeneuve in June of next year. We will communicate with you once again to let you know that your tickets are available in your account.

For those of you who unfortunately will not be able to join us in 2021, we invite you to fill out the form below. This form will serve as identification and as a confirmation of cancellation and therefore is mandatory.

“As the race organizers offered either a full refund or to roll over the tickets to the 2021 event, I chose the refund option [as detailed above.]

“As we are now five months past this point of being offered a full refund, and having not received the refund, as well as the Grand Prix being sponsored by taxpayers money, I urge the organizers to go ahead and fully refund all ticket holders as promised!

“I understand we are all facing difficult financial issues, but as an individual who paid hard-earned money for something that did not take place, it is only fair the promoter or organizer of the race to fully refund as promised.”

Liebmann is not alone, Facebook has a group in which aggrieved fans are still waiting for money back from their ill-fated 2020 race tickets.

Reddit also has an active page where readers are similarly disgruntled, one reporting, I requested my refund on July 27th, sent an email asking about the status on September 8th.

“A human was quick to reply to my email stating that they couldn’t provide details on timing just that the refund would not exceed the maximal processing delay of 60 days following the reception of your form.

“And 60 calendar days have passed – no refund yet. I’m in the same boat. I’m hoping it wasn’t 60 business days,” concluded the post.

Another Reddit user was fuming and explained, “After the race was actually cancelled, I submitted a refund request. They sent me a confirmation e-mail saying my request would be processed “within 60 days.” More than 60 days have passed, and I don’t have my money back.

“They no longer answer their phones. Instead, you have to leave a voicemail and ask for a callback. Their voicemail prompt says I should send an e-mail.

I left a voice message anyway, then I sent an e-mail. I then got an auto-reply to my e-mail saying they would be delayed responding due to a high volume of e-mails, and I should call instead. Honestly, at this point I feel like they owe me interest on my money.”

The u/tadcaster posted the letter sent in October by the organisers, signed by François Dumontier, president of the Canadian Grand Prix and the head of Octane Racing Group: 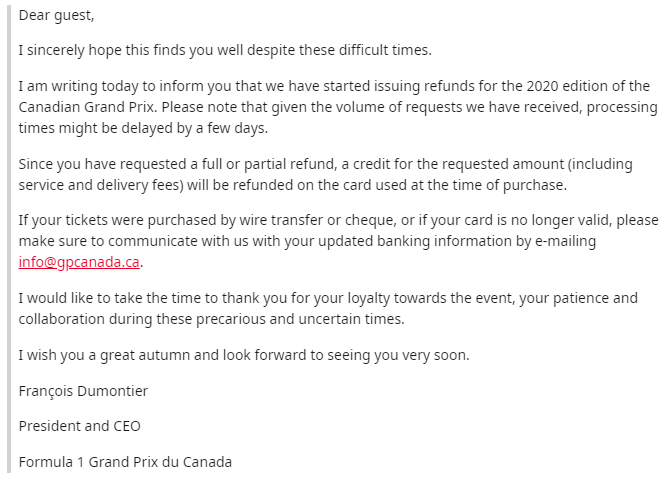 u/tadcaster concludes by asking: “Has anybody gotten a refund from GPCanada.ca?” And added in closing, “I won’t believe it until I see it. Fuck you, Dumontier. Fuck you and your broken promises.”

CBC reported in December that fans feared losing their tickets, quoting Ontario resident Eileen Sheridan who shelled out $1,800 for seats, “It makes me worry that I won’t see this money again. It’s a significant amount of money for us.

“It’s been a tough year for everybody, and it would definitely go a long way with us. It would just be nice to have that money back in my pocket,” added Sheridan.

In the same report, Taimi Williamson said of her $800 expenditure and the no refund in sight, “Enough is enough. It’s time to start giving people back their money.

“Obviously, I would love an $800 credit on my credit card heading into Christmas because it’s been a pretty steep month. I think it’s terrible from a customer service perspective,” she lamented.

Candian Grand Prix organisers, Dumontier and Octane Racing Group, have been approached for comment but have not answered to emails from our offices, other media or customers.