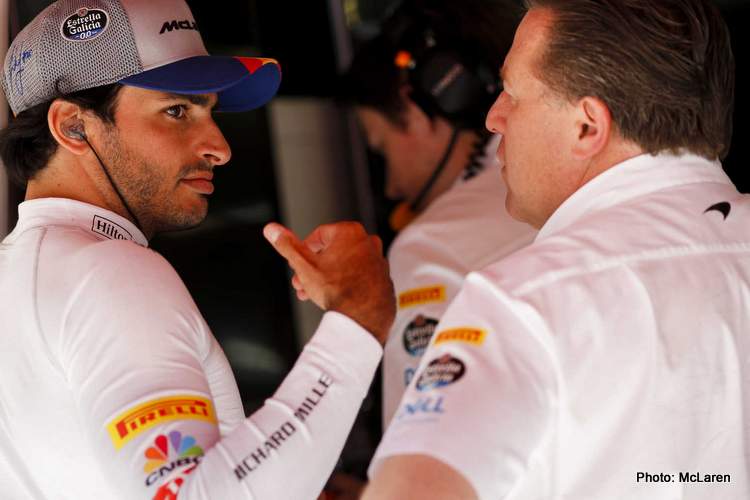 They were not long together, but there was a genuine love-affair between McLaren and Carlos Sainz.

Under Zak Brown, McLaren decided to take a chance on the young Spaniard who replaced mentor and fellow-countryman Fernando Alonso at the British team.

With Andreas Seidl steadying the ship, and the Alonso-factor not a distraction, the team became a force again, third in the championship their reward for a remarkable recovery.

Intrinsic to that momentum were the drivers Lando Norris and Carlos who worked well together and were both impressive in the race.

Carlos grew in stature as he handled the Norris challenge, delivering results and, of course, attracted the attention of Ferrari who opted to sign the 26-year-old to replace Sebastian Vettel, and slot in alongside Charles Leclerc.

McLaren, who welcomed Daniel Ricciardo to the team this year, were nevertheless gracious in their parting-of-ways with Carlos, team boss Brown told F1.com, “Carlos has done an outstanding job.

“We would never have signed him if we didn’t think he was an excellent Grand Prix driver. I think it’s fair to say he exceeded our expectations. I think he really came into his own in our environment.

“He’s done an outstanding job and he and Lando have helped lead the way these last couple of years.

At the end of his tenure in orange, stats show Carlos finished sixth in the two-season spell at Woking. Scoring his first podium at the 2019 Brazilian Grand Prix and finishing second at the Italian Grand Prix last year.

Notably, to put the Interlagos podium into context, a driver McLaren had not celebrated on the podium for six seasons, their last visit being Jenson Button’s second and Kevin Magnussen’s third place at the 2014 Australian Grand Prix.

The period in-between was torrid, the once mightiest team slipping down the field, before Brown’s masterplan kicked in to deliver a team intent on more podiums with their investment in Ricciardo who owes Carlos a thank you for helping to steady the ship and setting the stage for the Australian to benefit.

Brown continued, “When we look back on our two years with Carlos, we can proudly say that he has contributed a lot. He has definitely fulfilled his role. We have very fond memories of his time with us.

“But as you know, in a racing team, your drivers are the superstars, they’ve been big contributors, so have everyone at McLaren to give them a good, reliable race car.

Renault have been a good partner, so it’s all really come together and Carlos and Lando have made the most of the opportunity. We have built a great personal relationship with him and his father [off-road legend Carlos Sainz Snr] so we will look back with joy. And I’m sure he will too,” added the McLaren boss.

As it stood at the end of the last season, expectations are Daniel is stepping into a far better car at Woking than Carlos can expect at Maranello; where he will be up against a well established, team hero, in Leclerc, a prospect that sets the stage for an intriguing relationship as Ferrari under Mattia Binotto opts for youth.

Nevertheless, Carlos may one day look back on McLaren as his best years unless, of course, Binotto can resurrect Ferrari, the team every racing driver dreams of driving for but right now is in the nightmare phase of their deep sleep.