Hamilton: It’s not easy being my teammate 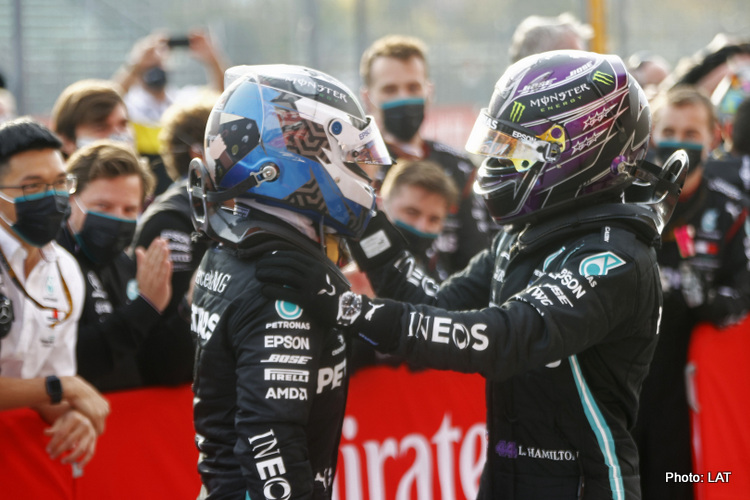 Lewis Hamilton has dubbed his Mercedes teammate Valtteri Bottas one of the mentally strongest drivers on the grid.

The Finn became Hamilton’s teammate in 2017 and has now lost out to him in four consecutive seasons, with the Brit securing his seventh world title in 2020.

While the 36-year-old has tended to have the edge on race day, Bottas has been incredibly competitive in qualifying throughout their time as teammates and took five pole positions last year, as well as two Grand Prix victories.

“When I talk about people need to give Valtteri his due respect, I think you’ve got to remember who he’s driving up against; it’s not easy being my teammate,” he said, as reported by Formula 1. “But he comes in, weekend in weekend out, with the same mentality.

“He’s never moaning, complaining that something’s wrong with the car, it’s always ‘I’ve got to do a better job’, and I don’t know any driver that does that. I think that’s something we share in common: We come into this weekend with a fresh head, and I think mentally, he’s one of the strongest drivers here.”

Since joining Mercedes Bottas has won nine races and secured 16 pole positions, finishing second in the drivers’ championship in 2019 and 2020.

“I think Valtteri is getting stronger and stronger each year,” Hamilton added.

“The media have commented on the [Bottas] 2.0 etc, and every year you can see him just grafting away and chipping away at trying to raise the bar in so many different areas.

“And you’ve seen this year, I think, whilst the points gap now is where it is, if you look at a lot of qualifying, it was the smallest of margins.”