Marko: Albon could be loaned out to other teams 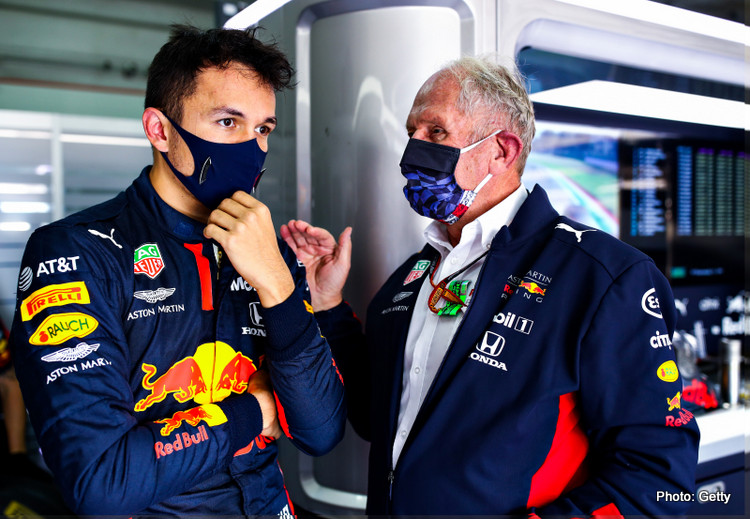 Red Bull adviser Dr Helmut Marko has revealed that Alex Albon could be loaned to another team during the 2021 Formula 1 season.

Albon was dropped by the Milton Keynes-based outfit after an underwhelming season, where he finished seventh in the drivers’ standings and ended up on the podium just twice.

With Yuki Tsunoda being promoted to Scuderia AlphaTauri and Pierre Gasly being retained, the Thai driver will not return to the Red Bull junior team and instead faces a season on the sidelines.

However, after COVID-19 forced Lance Stroll, Sergio Perez and Lewis Hamilton to miss races during the 2020 campaign, Marko hinted that Albon could feature for another team next year if a driver is forced to miss out once again.

“We have assured him we will use him extensively in test drives,” he told Motorsport-total.com.

“The 2022 tyres are to be tested, for which there are separate tests. He will drive a lot of simulators. He will also be a reserve driver for many races. We have four cars. The chances that he will be used are there.

“In addition, we are ready to loan him out if the situation arises in another team that they need a driver at short notice, so he can achieve racing kilometres. It is not the end. We will see whether we can stabilise him.”

While his teammate Max Verstappen came third in the standings, picking up two wins in the process, Albon was too often cut adrift in the midfield and Marko said that his struggles were part of a “mental story”.

Asked why Red Bull decided to replace the 24-year-old with Perez, the Austrian explained: “A lack of consistency. And he was too easily unsettled, for example when the wind increased in intensity or came from a different direction. Or when the tyres started to degrade, he lost a disproportionately large amount of time.

“It’s certainly a mental story too. But if you have a team-mate who drives at the absolute top level, no matter what the car is, I think that plays a subordinate role.

“Of course, all the reports and the unsatisfactory results unsettled him. His gap to Verstappen increased over the course of the season, not decreased. Admittedly marginal, but it did grow.”