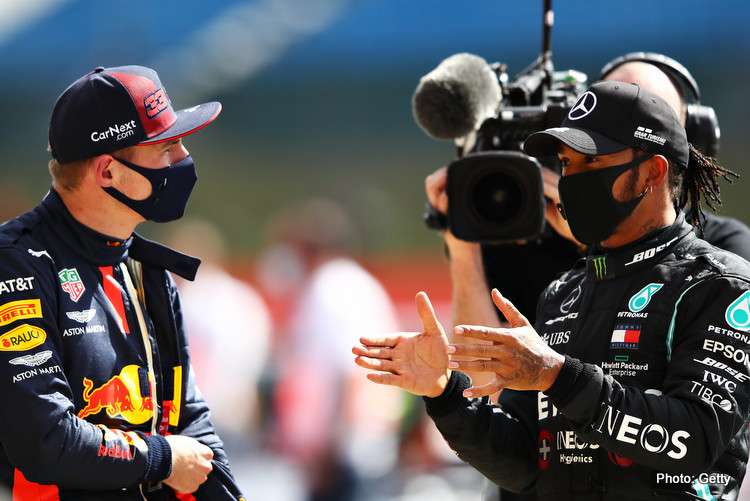 Formula 1 managing director Ross Brawn has heaped praise on Lewis Hamilton for his title-winning performance in 2020, while singling-out rival Max Verstappen for his improved maturity.

Appearing on the F1 Nation podcast, Brawn was asked to pick his driver of the year, to which he looked no further than Hamilton.

“I think it has to be Lewis,” he said. “And I say has to be in the sense that he has set a new benchmark in terms of world championships.”

“I think it’s very easy for people to assume that he had the best car. It’s an easy exercise and it’s far from the case. He definitely won races he shouldn’t have won.

“We think of Turkey, probably the most difficult race of the year, and he sat there quietly getting on with it until the opportunity came and there he was in the pound seat and he won the race.

“He just endorsed what we already knew, that he is a truly exceptional driver. Definitely in the higher echelons of the Schumacher’s and the Senna’s, he’s in that group, there’s no doubt about it.”

As for Verstappen, Brawn suggested the Red Bull driver had shown plenty of growth in a year that did not go according to plan.

“I thought Max matured very well this year,” he explained. “I think compared to the Max of a couple of years ago.

“He was pretty unlucky this year, I have to say. There were a couple of times the car didn’t quite [perform]… and he got caught up in accidents which were not his fault and we were deprived of seeing some great races from him.”

Nevertheless, Verstappen managed to finish only nine points behind Mercedes’ Valtteri Bottas in an inferior car, and Brawn believes the sport is in a good place with young drivers like the Dutchman, Charles Leclerc and George Russell in the picture.

“I’m optimistic with the group of drivers that we have, that we are going to have some great races in the future,” he said. “Particularly when we are going to try and improve the cars and the competitiveness of the teams and the ability to follow.”