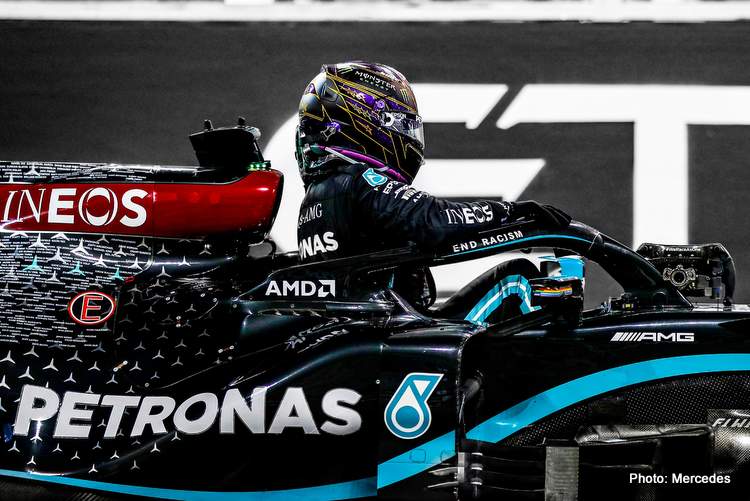 Mika Hakkinen thinks that it will not take long for Lewis Hamilton and Mercedes to agree to a new contract for the 2021 Formula 1 season.

The 35-year-old is currently without a deal for next year following the expiry of his previous contract but has remained calm when asked about his future in the media.

Both Hamilton and Mercedes team principal Toto Wolff appear confident that they will reach an agreement, although it is unknown how long the seven-time world champion wants to continue racing in the sport.

Mercedes do have Williams driver George Russell as part of their driver academy and he filled in ably for Hamilton at the Sakhir Grand Prix while the Brit was absent due to a positive COVID-19 test.

As a result of Russell’s showing, where he led teammate Valtteri Bottas for much of the race, Wolff and the team have come under pressure to reveal their plans for the future.

Bottas does have a one-year deal for next season, but otherwise, things remain unclear.

Writing in his Unibet column, two-time world champion Hakkinen said that Hamilton’s “enthusiasm and motivation for Formula 1 appears undiminished” and therefore he expected him to stay for at least another two years.

“Lewis did well to come back less than two weeks after testing position for Covid, and he will now focus on finalising his contract for next season,” he said.

“It is unusual to leave a contract negotiation until after a season has finished, but when you consider the success they have had together I am sure that Lewis and Mercedes team boss Toto Wolff will not take many days to finalise a new deal.

“The question many people are asking, of course, is for how many more years Lewis will recommit to Formula 1? Two years with an option for a third would take Lewis all the way to the end of 2023 when he will be about to turn 39 years of age. Meanwhile, his enthusiasm and motivation for Formula 1 appears undiminished as he focuses on an eighth World Championship title.”