Alonso: It was very nice to be back in the car 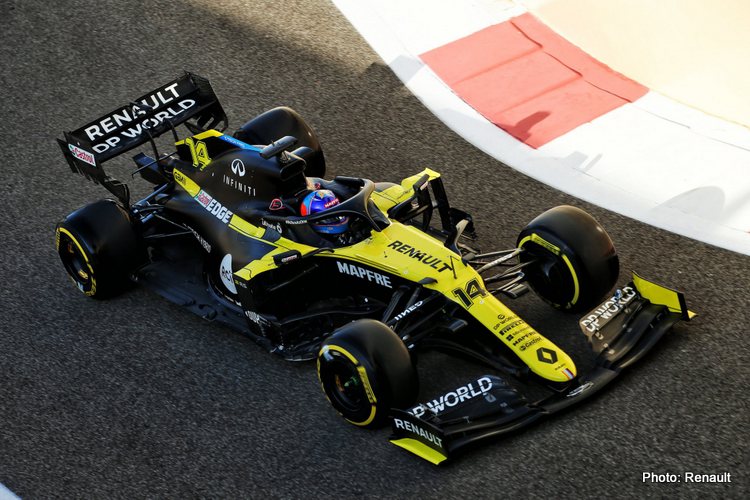 Fernando Alonso says his first significant run in a 2020 Formula 1 car has “ignited the competitive spirit” after topping the timesheets in the young driver test at Yas Marina Circuit on Tuesday.

The two-time driver’s champion, who will be returning to the sport with Renault (rebranded as Alpine) in 2021, was granted a special dispensation to drive in the post-season test usually reserved for drivers with two grands prix or less of F1 experience.

Making the most of the opportunity, Alonso finished with the fastest time of the day, a 1:36.333, which was 0.262 seconds faster than second-placed Nyck de Vries of Mercedes, and would have been good enough to qualify P11 during the weekend’s Abu Dhabi Grand Prix.

“It was good and very nice to be back in the car especially with the race team,” Alonso, said afterwards. “I’ve been testing the 2018 car in preparation but this one felt a bit more serious and it ignited a little bit the competitive spirit.

“It was great to feel the modern cars and experience what they can do.”

With the team over the race weekend, Alonso had already clocked up laps of the circuit in several head-turning demonstration runs with his title-winning R25 from 2005. However, with only 100km of prior running in the 2020 car at a filming day, he suggested the 105 laps he ran on Tuesday were particularly valuable heading into next season.

“I was watching the team’s progress at the weekend closely and it was nice to experience what I learnt from the outside and then inside the cockpit today,” he explained. ”

We signed off lots of basic things we did in preparation at the factory like seat fitting, pedal position and so on, which is beneficial with only one and a half days of winter testing next year.

“We ticked boxes today and we go into Christmas and New Year with good spirit and everyone motivated in the team.”