Renault: Cheers for the ride, Daniel 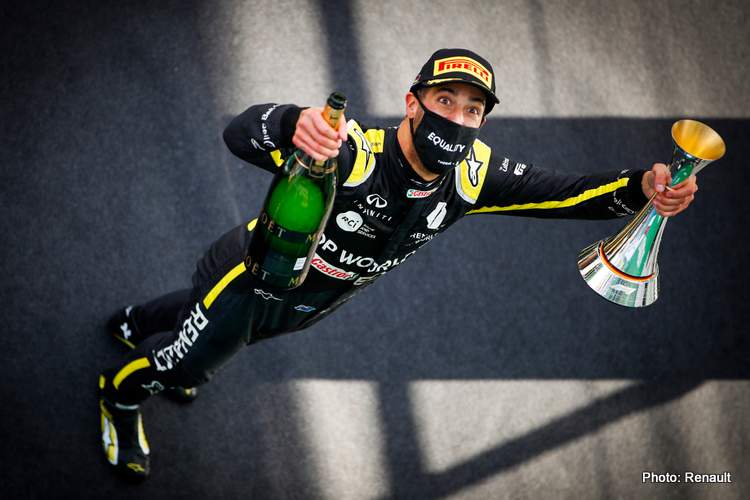 Daniel Ricciardo signed off as a Renault driver in the manner in which he tackled his two seasons with the team, with a gutsy performance and, once again, humbling his teammate Esteban Ocon.

Although the Australian started the 2020 season finale in Abu Dhabi Grand Prix behind the Frenchman on the grid when it mattered on the day Daniel delivered the most points.

He thus leaves Renault, in their last season before they morph into Alpine, with his head held high, having won many hearts and minds at Vichy and Enstone.

At the end of his 37th race in yellow and black, the #3 car finished seventh and stole the fastest lap of the race from winner Max Verstappen, as a final thank you to the team he departs for a new chapter at McLaren; powered by Mercedes for the first time in his career.

Renault were gracious in their praise for a driver who they had the privilege of working with for two years, in which their game was raised and podiums finally became a reality after years of broken promises.

Daniel departs Renault in a better place than they were when he joined them.

Team boss Cyril Abiteboul, said before Daniels final race with the team, “When the team signed Daniel in 2018, it clearly brought a lot of attention and some raised eyebrows in the paddock. It marked a statement of intent, coupled with some pressure from signing a multiple Grand Prix winner.

“The objectives after strong progress that year were very clear. While 2019 was disappointing from an overall championship perspective, there were memorable moments like in Canada and Italy. While those moments were fewer than we’d have liked, having a driver of Daniel’s ability brought clear and required changes to the team and his influence went beyond just driving the car.

“This season, Daniel has been admirable in pushing on and his professionalism has been nothing short of exceptional, also after the announcement of his departure for next season.

“The moment in Germany with the first podium was a high point and signalled an important milestone in the team’s journey, which we will build upon. In this new phase as we transition from Renault to Alpine, the legacy left by Daniel will remain an integral part of our foundation.

“We look forward to fighting him on track with the team in a much better position courtesy of his influence. We thank Daniel for his contribution to the team over the last two years and we wish him the best for his new path.”

Daniel signed with the team prior to the 2019 FIA Formula 1 World Championship season as he embarked on a fresh journey at a high time in his already established and highly successful Formula 1 career.

A seven-time race winner, Daniel brought a new energy to the team with his infectious smile, chirpy persona and an undeniable talent at the wheel of a Formula 1 car.

Daniel, along with Nico Hülkenberg, helped the team finish fifth in the 2019 Championship. Standout performances included lining up fourth on the grid at the Canadian Grand Prix after a stellar one-shot qualifying lap, before a superb fourth-place finish in Monza at the Italian Grand Prix.

The Australian hit the ground running in 2020, rising to the challenge of a condensed season with multiple races fitted into a packed calendar. Daniel entered a purple patch of form, finishing fourth on three occasions across Silverstone, Spa and Mugello; agonisingly short of a maiden podium with the team.

But he made no mistake when the opportunity arose in Germany to claim Renault’s first podium as a full manufacturer team since the 2010 Belgian Grand Prix with a measured drive to third place.

If that wasn’t enough, Daniel backed that up with a second podium of the season at the Emilia Romagna Grand Prix to propel the team into third place in the Constructors’ Championship and himself to fourth in the Drivers’ standings.

Finishes of seventh and fifth across both Bahrain races extended Daniel’s points-scoring run to ten in a row, contributing to keep the team in the battle for third in the standings.

This weekend in Abu Dhabi, Daniel will line up in black and yellow for the 38th time as the team bids the ever-smiling Perth-born a fond farewell.

Cheers for the ride, Daniel.