Leclerc: I learnt so much from Seb 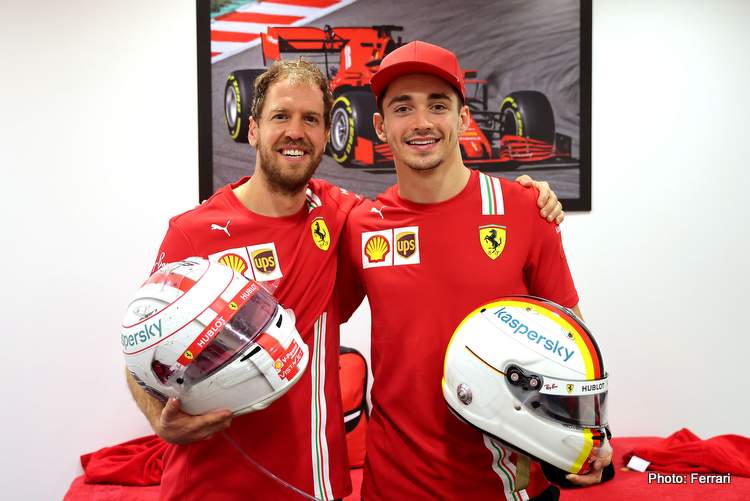 Charles Leclerc waxed lyrical when bidding “ciao” to his teammate Sebastian Vettel who endured his last race as a Ferrari driver at the season final 2020 Abu Dhabi Grand Prix.

In another forgettable race for the beleaguered Ferrari team, this time at Yas Marina Circuit, the Reds were nowhere after an afternoon in which their drivers hustled hard for 13th and 14th place, where Charles and Seb finished on the day.

The real highlight of the weekend for them, was the emotional final goodbye to the departing German driver, whose performance nosedived this year under Mattia Binotto’s charge.

On the cool-down lap Seb broke into song for the team he spent six seasons with, and then Charles and Seb swapping helmets, symbolising the final changing of the guard at Maranello.

The four-time World Champ and 121 podium finisher (53-times as a grand prix winner) rides out of the gates as two-time podium finisher, and zero-times F1 winner, Carlos Sainz drives in.

It would be fair to say that Charles’s success in Red signalled the demise of Seb, especially this season when the younger driver found ways to extract more out of the pathetic package Binotto and his team dished out for their drivers.

The younger driver with so much to prove often putting the SF1000 where it had no place being, or crashing, while Seb with four crowns on his mantlepiece was perhaps not prepared to risk it all in the same piece of kit. And, for the conspiracy theory brigade out there, was it really the same SF1000 he was given?

I learnt so much from you as a person and as a driver in these last two years together.
Thanks for pushing me to improve all the time, it’s been a honor to be your teammate, and I honestly wish you the very best.
Top driver and a Top Man pic.twitter.com/4UwsTT4spC

Nevertheless, the Monegasque was humble enough to acknowledge and praise Seb on Twitter: “I learnt so much from you as a person and as a driver in these last two years together.

“Thanks for pushing me to improve all the time, it’s been an honour to be your teammate, and I honestly wish you the very best. Top driver and a Top Man.”

In the team race report, the 23-year-old added, “I want to thank Seb for everything he has given to the team. He is an amazing person and a fantastic driver.

“It’s been great to have him on the other side of the garage for the past two years and I wish him all the best for the future.”

Seb, ten years his senior, reciprocated, “I will miss Charles. Obviously, he gave me a headache here and there, and we are at very different stages of our lives and careers.

“But he’s certainly a good kid and I think he will go a long way, he will be the man of the future. I hope he gets the car he deserves.”

Stats show that in the two seasons together Charles better Seb in both 2019 and 2020.