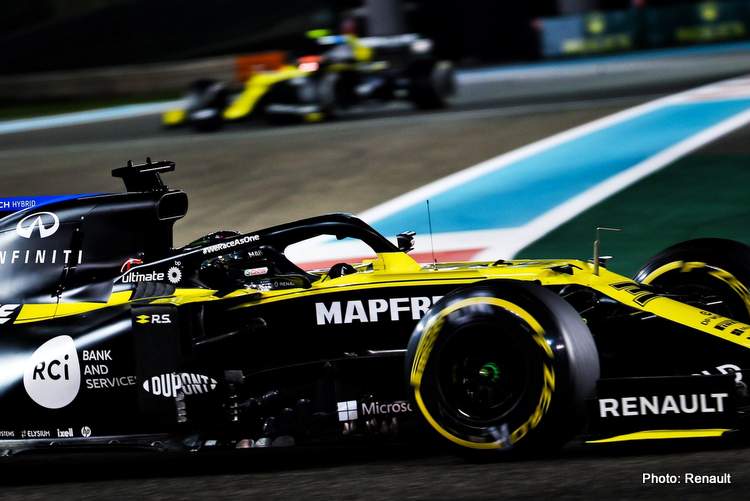 Daniel Ricciardo’s last race with Renault in Formula 1 marked the end of an era. not only does the Australian depart but, also, the French team competed in their final Grand Prix as they hand the baton to Alpine for the future.

Th 2020 Abu Dhabi Grand Prix was Renault’s 400th race in F1 and, for now, their last, bringing to an end a great legacy which began as pioneers of the first F1 turbo era in the seventies and as a team racked up 35 Grand Prix victories.

On Sunday at Yas Marina Circuit, Daniel delivered another feisty and hard-fought-for seventh-place from 12th on the grid, setting fastest lap to boot and beating teammate Esteban Ocon who started ahead of him on the grid.

It was a brief two-year romance between the parties, but it is clear the big-smiling Aussie won their hearts and minds at Enstone. And delivered a fitting farewell performance for them too.

After his 37th and final race in Yellow and Black, Daniel reported, “Considering we started eleventh I’m really satisfied with seventh position tonight. My stint on the Hard tyres at the beginning was really strong and the car felt good the whole time.

“The Safety Car changed things slightly, but we couldn’t progress fast enough to catch the cars ahead. I know we didn’t manage to finish third in the Constructors’ Championship but, overall, it’s been a strong season for the team and compared to last year it’s a great step forward.

“My last lap in the car was the fastest on track and I was pushing hard for that. Very nice! Merci beaucoup to the team for an awesome two years!” added Daniel.

Next year he will line-up as a McLaren driver.

Team boss Cyril Abiteboul said of the departing driver, “He drove brilliantly in his first stint on Hards, going long and then waiting to see if a safety car could occur. It didn’t happen but he ended up gaining four positions and the fastest lap, more than any other driver.”

The French team boss then tipped his hat at their sole customer team, where Daniel heads next year, “Congratulations also to McLaren. They were P9 when we started our journey together. They finish P3. We are proud of having directly contributed to their rebirth.”