Perez: It is sad to be leaving the team this way 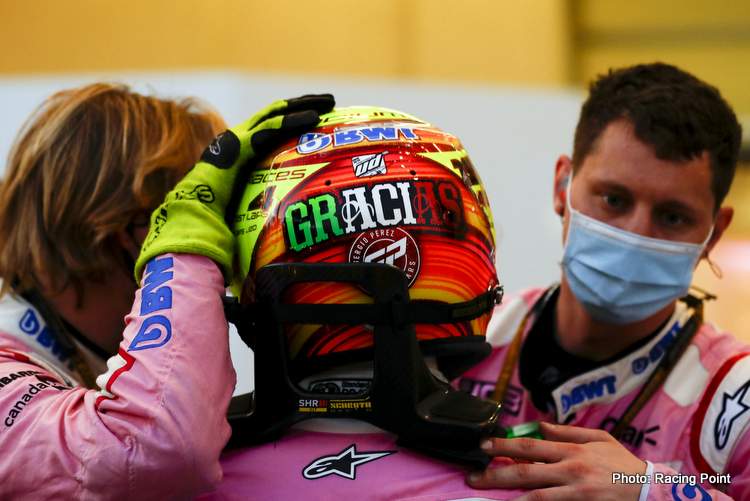 A week ago in Bahrain, to the delight of the Formula 1 world Sergio Perez won the 2020 Sakhir Grand Prix, his first victory in the top flight, ditto Racing Point – a day packed with euphoria and history.

But a week later – at today’s Abu Dhabi Grand Prix – it was utter despair when, first, the Mercedes PU on the Racing Point expired during qualy, and then replacement went up in smoke as Sergio was finding his rhythm and carving his way upfield after starting from last.

It was a sad end to his time at Racing Point, and tragically perhaps even F1, and he acknowledged as much when he told reporters after the race at Yas Marina Circuit, “It is sad to be leaving the team this way. Some of them were crying at the end. You have to remember the whole season.

“It was a repeat of the engine problem we had in Bahrain. I really wanted to sign off with a strong race for everyone in the team. I hope people remember winning the Sakhir Grand Prix instead of this weekend!”

A DNF in your final race for the team stings. Big time.

But @SChecoPerez made sure the morale at @RacingPointF1 didn’t drop after he pulled over on Sunday ❤️#AbuDhabiGP 🇦🇪 #F1 pic.twitter.com/yx72e5K8yg

“Looking at the bigger picture, it’s a real shame to have retired because we needed to get both cars into the points today to take P3 in the Constructors’ Championship. Congratulations to McLaren, but I think we can still be very proud of our season.

“We won a race, took podiums and were just so unlucky in some situations – especially with both drivers having to miss races.

“On my side, I’m delighted that we were able to get P4 in the Drivers’ Championship. This season has been really special, but I’m ready for a break now and I’m very much looking forward to the future.

“Who knows what will happen next. I am just looking forward to go going back home. Whatever comes next I will be ready for it,” added the Mexican whose only hope of staying on the grid is Red Bull ousting Alex Albon and making way for him.

Other than that, the 30-year-old faces a sabbatical at a time when he is in he very best form of his career, his absence from the grid would ba travesty and a blow to the credibility of drivers in the top flight.

A big ‘thank you’ to everybody in the team for their huge efforts and a fond farewell to Sergio after seven years with the team. We wish him all the best for the future,” added the Racing Point team boss.

Seven years of brilliant memories. Thank you for being a teammate and a friend. We wish you nothing but the very best for the future, amigo. You’ll always be part of the family ❤️ #GraciasCheco#AbuDhabiGP #F1 @SChecoPerez pic.twitter.com/qvNbU6APdP