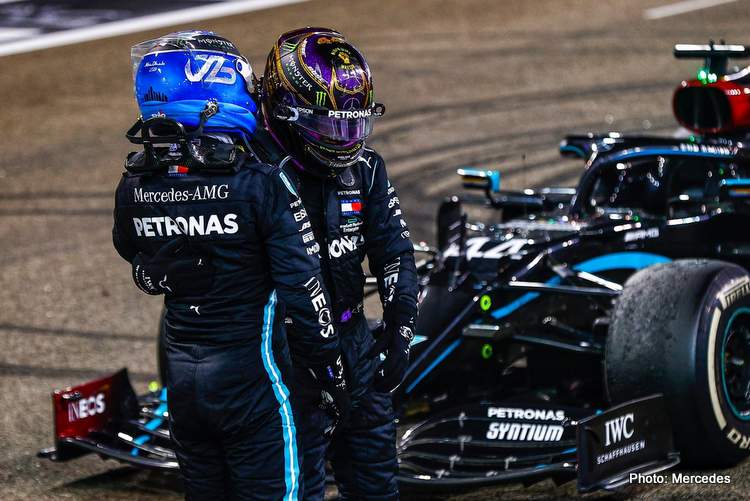 Lewis Hamilton put a bout of COVID-19 behind him to end his historic season in Abu Dhabi on Sunday night, the Mercedes driver finished third a week after being in isolation and recovering from the virus.

It was always going to be a tough ask for the World Champ to finish the season on a high of victory, but in the end, the job was done long ago for him and his team, by midseason F1 knew the outcome would be inevitable another Mercedes rout.

Hence credit to him and the team for keeping their foot on the gas to the finish line, when they could have cruised but then again that is not their style.

Speaking after finishing third at Yas Marina Circuit, Lewis said, “You can’t win them all. Considering the past couple of weeks I’ve had I really am generally happy with the weekend.

“It’s obviously not 100 percent and not as good perhaps as we would like, but congratulations to Max. That was a really hard race for me physically. All the year physically I’ve been fine but today I definitely wasn’t.

“I’m just glad it’s over and a big, big thank you to the team for their continued support. It’s still a fantastic result to get two podium finishes for us.”

He earlier told Sky F1 reporters, “Covid is no joke. I never thought it was. I knew it would be tough because people out there are losing their lives.

“I always find very strange to see world leaders laughing it off like it is nothing. To come back here this weekend I knew I wouldn’t physically be where I was all season but I made it.

“I am destroyed. I do not feel good. I am happy and grateful I am alive and live to fight another day,” he added.

On a positive note, tonight’s race aside, Mercedes cleaned up thoroughly this season ending the season with a whopping 573 points, 254 more than closest rivals while Lewis topped the 2020 F1 drivers’ standings 2ith 347 points, 124 more than second-placed teammate Valtteri Bottas.

The Mercedes W11 was yet another beast for the team, perhaps their best car ever that never stopped evolving, with no one better than making the most of it than the guy who won 11 times in it this season.

Serving them up HOT 🔥 Sending W11 into retirement with some fresh 🍩 🍩 🍩! #AbuDhabiGP pic.twitter.com/9FwcvCXXcq