Bottas: They were just too quick 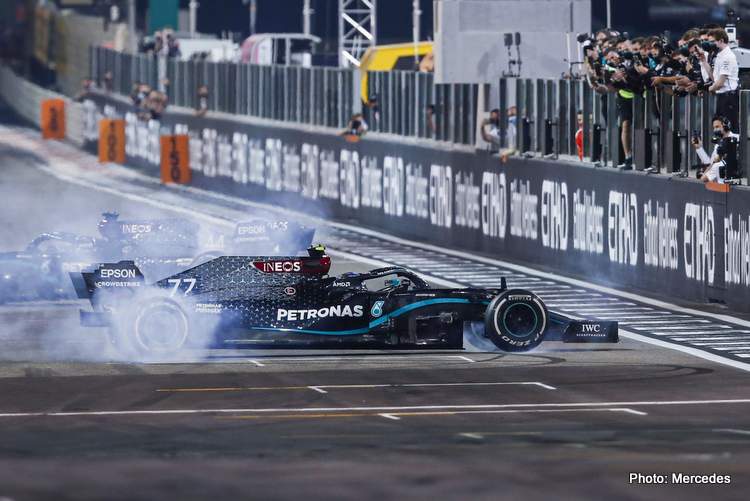 Valtteri Bottas needed a good result at the season-ending 2020 Abu Dhabi Grand Prix and, to a certain extent, he did redeem himself on the day finishing second to race winner Max Verstappen but beating Mercedes teammate Lewis Hamilton in the process.

The Finn needed a big result, and second was what Mercedes were good for on the day at Yas Marina Circuit; Valtteri acknowledged after the race, “Congratulations to Max and Red Bull on the win. They were just too quick today and we couldn’t quite keep up with them.

“We expected the race pace to be quite equal heading into today, but they were able to really control the pace and build the gap when they needed to. From my side, though, it was a solid race with no mistakes and I think I extracted everything from our package.

“So, in that sense, it’s been a good race, I finished ahead of my team-mate and it’s nice to be back on the podium. A huge thank you and well done to the entire team on an amazing year.

“I’m really proud we could end the season with P1 and P2 in the Drivers’ Championship; every single team member has done such an incredible job, so thank you very much.

“I still have a few commitments to do but then I’ll have some time off over Christmas, and then a quick reset, some training and we start from zero again for next year. I’m looking forward to it,” added the Mercedes driver.

The result will have bought him some time, and Toto Wolff was relieved for his driver, “Valtteri has had a tough few weekends, but he came back strongly here and got everything out of the car; I think maybe we have unlocked something for the future across this weekend, too.”