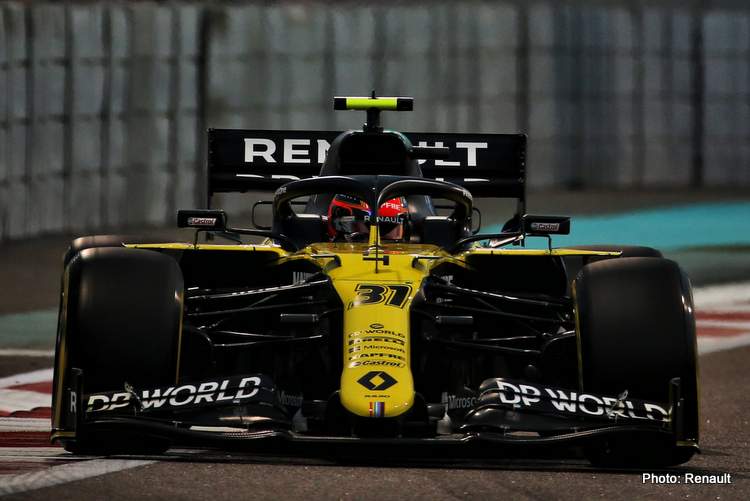 After the giddiness of a podium finish a week ago, Renault fell back to earth with a bang in qualifying for the 2020 Abu Dhabi Grand Prix, neither of their cars progressed into Q3, while similarly powered McLaren duo did so with ease.

Podium winner last Sunday, Esteban Ocon was quicker of the Renault pair to claim 11th on the grid, with Daniel Ricciardo 12th for an all-black and yellow sixth row for tomorrow’s race at Yas Marina Circuit.

But it was disappointing as the McLaren’s were almost a full second up the road compared to Renault. Clearly, the sweetspot in the RS20 chassis did not expose itself on the day.

Sporting director, Alan Permane,  “Obviously, it was a disappointing qualifying session for us. The car was working very well earlier in Free Practice 3, so we need to have a close look and learn from this.

“There were no particular balance issues but both cars were lacking overall grip. On the plus side, we will have a free starting tyre choice and we saw what can happen from eleventh on the grid last weekend.

“We will give everything in this final race to score a good haul of points and end the season on a positive note,” added Permane.

Esteban, who was a tad quicker than his teammate, only beat Daniel twice this year, the Australian outqualifying his teammate on 15 occasions this year.

The Frenchman reported, “We have to dig into that as it wasn’t quite what we were aiming for today. We’ve been in the top ten all weekend, third and fourth in Free Practice 3, and then we seemed to lose the rear, the grip and the tyres were not working as well as they have been.

“It’s something we need to understand because it’s been a solid weekend other than this session. It’s not all over, though, and tomorrow it’s all or nothing.

“We need to come back, we need to score good points and we do have the free starting tyre choice, which does give us something to work with. We aim to finish this season well and inside the points, declared the Frenchman.

Daniel would have wanted a better showing in his final qualifying for Renault, but it was not to be, “It’s a shame finishing twelfth today as we looked quick this morning with third and fourth and we were aiming for much higher than that.

“We got through to Q2 quite comfortably with just one fast lap on the Softs, but then we struggled to match the pace on both Medium and Soft tyres. I don’t think we know why yet, so we’ll take a look at it tonight.

“I don’t like starting eleventh, but we both have tyre choice tomorrow so that’s a positive from today as a strategy is going to be key in the race. We saw last weekend how starting on the Medium tyres can pay off, so we have options tomorrow.

“It’s my last race with the team too and I want to make sure we end this on a high,” added the Australian, who will start his 196th Grand Prix on Sunday in Abu Dhabi, 36 of them as a Renault driver.