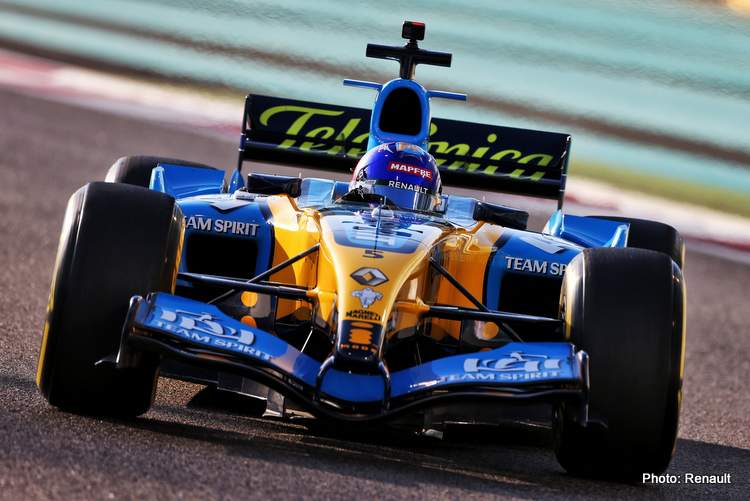 Fernando Alonso took a trip back to the future when he powered around Yas Marina Circuit in his 2005 title-winning Renault R25 with the screeching V10 engine that shook the plush venue and the surrounding neighbourhoods.

He Tweeted afterwards: “This car still sooooo fast. Now with the slick tires even more. What a feeling. What a weekend it will be. More laps tomorrow. Best way to thank the Renault F1 Team for this era and welcome Alpine for the future.”

The 39-year-old Spaniard will spearhead the new Alpine era for the team that is prominently embroidered into the glorious tapestry of F1 history he will drive it again on Saturday before qualifying and on Sunday, before the race.

Fernando will be back at Yas to test this year’s car as he preps for a much-anticipated return to the top flight next year.

After more than 40 years in Formula 1, two Drivers’ and two Constructors’ World Championship titles, 35 wins and 399 race starts, the 2020 Abu Dhabi Grand Prix will be the final race for the Renault team name before it hands the baton to sister brand #alpine in 2021.

Renault celebrated its heritage with a remarkable demonstration run at Yas Marina linking past, present and future. Fernando reunited with his championship-winning 2005 R25 car ahead of his 2021 return: a symbol of our joint heritage but intense appetite for further success.

The R25 to this day remains one of the most remarkable cars in the history of Formula 1. Powered by the iconic Renault V10 engine, which had been dominant across the 90s and early noughties, the R25’s sharp chassis design and distinctive blue and yellow livery made it instantly recognisable.

Across the 19-race 2005 season, Fernando and team-mate Gianfranco Fisichella scored eight wins, including a poignant victory at the team’s home race in France, seven pole positions and 18 podiums to give #renault its first Constructors’ championship and Fernando his first Drivers’ title.

Now, 15 years later, the R25 will ran again after a remarkable restoration from Renault Sport Racing’s Enstone and Viry sites and industry specialists Rennwerk Company, based in Germany. Last used for a demo run in 2006, the R25 was stored as part of the Renault Classic collection until a project to restore the ‘Beast’ to its full glory got underway in 2018.

The project to restore the chassis started in 2019 with Rennwerk. Plans were made to run the car in the 2020 French Grand Prix, however they were put on ice due to the COVID-19 pandemic. Restarted in October 2020, more than 50 man-hours of engine revision at Viry were necessary.

Just two weeks later, the V10 roared into life at the Rennwerk workshop and by mid-November, the R25 had completed an astonishing first run at the La Ferté Gaucher circuit just outside Paris.

This car still sooooo fast. Now with the slick tires even more. What a feeling. What a weekend it will be. More laps tomorrow. Best way to Thank @RenaultF1Team for this era ,and Welcome Alpine @alpine_cars for the future 💙 #f1 #v10 #Renault #Alpine #RSspirit pic.twitter.com/0ubBkR7ANP