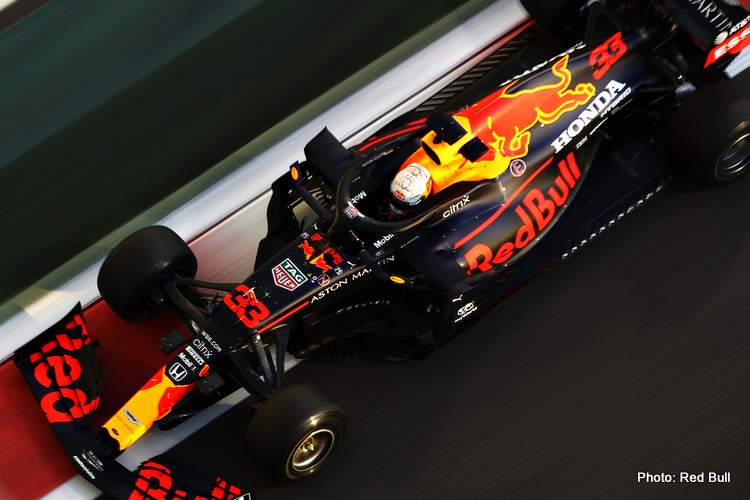 All but conceding defeat before the lights have gone out, Max Verstappen said on Friday that he has resigned himself to claiming “my seat again” as he was third behind the two Mercedes in practice Friday ahead of the season-ending Abu Dhabi Grand Prix.

The Red Bull driver was returning to a theme he raised last weekend in Bahrain after qualifying third behind two Mercedes drivers for the fifth time in six races. He was taken out of Sunday’s Sakhir Grand Prix in a first lap crash.

On Friday, Verstappen was seven-tenths of a second adrift of Valtteri Bottas and half a second from Lewis Hamilton, who returned after a bout of Covid-19, to drive at the Yas Marina Circuit.

That meant he occupied his habitual third place chair at the press conference.

“I’m going to claim my seat again,” he said. “We have a little bit of work to do to close the gap — they seem very strong again.”

The Dutchman said this week that he feels he has progressed as a driver this season despite the domination by the Mercedes team and seven-time champion Hamilton.

On Friday, he was one of several drivers, including Hamilton, who exceeded the track limits during the sessions — notably at Turn 21.

“I don’t think it will be a problem,” he said, looking ahead to qualifying and the race. “It’s Friday practice so you know in qualifying that you can’t go there. So, you pay a bit more attention.

“Let’s see what the other drivers say in the briefing, but at the end of the day we’ll be fine — just exploring the limits and getting an understanding of how far you can go with the car.”

His under-pressure Red Bull team-mate Alex Albon was fourth on Friday as he sought to produce an improvement in form that may help him save his seat.

The London-born Thai driver has been told to ‘raise his game’ to save his seat amid speculation that Red Bull are considering recruiting Sergio Perez, who is leaving Racing Point this weekend.

Perez claimed his maiden victory last Sunday in his 190th race and will be a free agent.