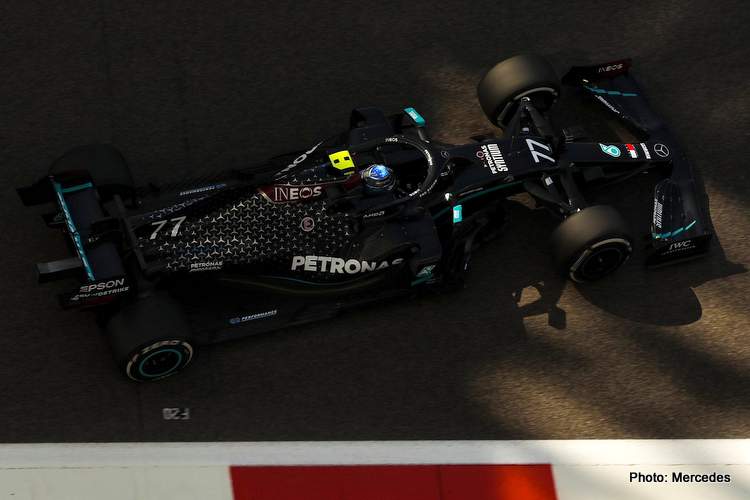 Mercedes driver Valtteri Bottas topped the timing screens at the end of the first practice session of the Abu Dhabi Grand Prix on Friday at Yas Marina Circuit.

Teammate Lewis Hamilton, back from sick leave, after a subdued FP1 he came out of his shell in the afternoon session to post the second quickest time, as Mercedes were the class of the field at Yas Marina on Friday by quite a margin and it is still early days..

Bottas’ best effort 1:36.276s was a couple of tenths up on Hamilton who last week, this time, was bedridden with COVID-19.

Seven-tenths of a second behind was Max Verstappen in the Red Bull, who topped FP1 but hampered by lack of horsepower, relative to Mercedes, on a track with a couple of very long straights is never going to be kind to the RB16.

Teammate Alex Albon survived a spin to go fourth fastest, a couple of tenths shy of the sister car while the AlphaTauris were both out of the top ten when in Bahrain they were at the sharp end.

Lando Norris was next up in the McLaren, quickest of the Renault powered quartet, albeit 1.1 seconds down on the top time; followed by Esteban Ocon, who appears inspired by his podium last Sunday in Sakhir. For the moment he has had the better of an out of sorts Daniel Ricciardo, who was only good for ninth… but, it is desperately close in that midfield, only 0.003s (!) separated the Frenchman in sixth and Ricciardo in ninth.

Between the yellow and black cars, on the timesheets, was Sakhir Grand Prix winner Sergio Perez in the Racing Point in seventh, and Ferrari’s Charles Leclerc eighth. Lance Stroll was tenth in the other Pink car.

Down in 15th, in his last race weekend as a Ferrari driver, Sebastian Vettel struggled to find the same pace his teammate extracted from the SF1000. Another below-par weekend awaits the Reds, how much below will be revealed over the next couple of days.

With Romain Grosjean still recovering from his fiery Bahrain shunt, Pietro Fittipaldi was still on duty for Haas and ended the day 19th.

George Russell was back at Williams, in 18th, less than a week ago he was running the show until fate had other plans for him.

It’s unusual for Mercedes to unleash the ‘beast’ on Friday’s but they appear to have something super special for their drivers in the W11 for this Sunday. Perhaps, at the season finale, Toto Wolff will ramp it up to show us how much they really have in the tank

Nevertheless, it’s early days at Yas, if there is more to come from the World Champs there will be nowhere to hide for their rivals in this last race of a bewildering F1 season in which they were collectively, comprehensively trounced by Mercedes yet again. 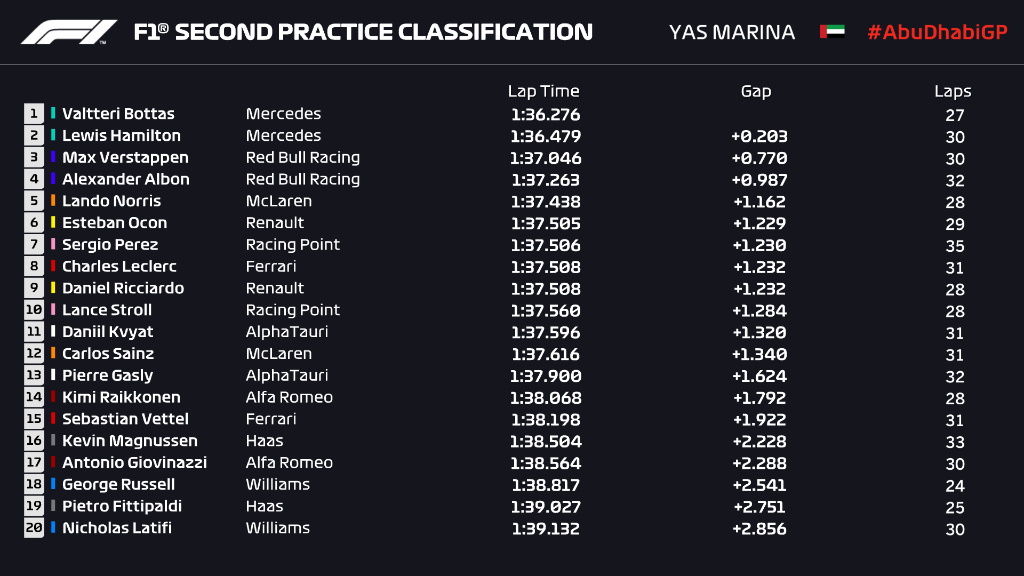