Bottas: No one could have done a better job than me in my car 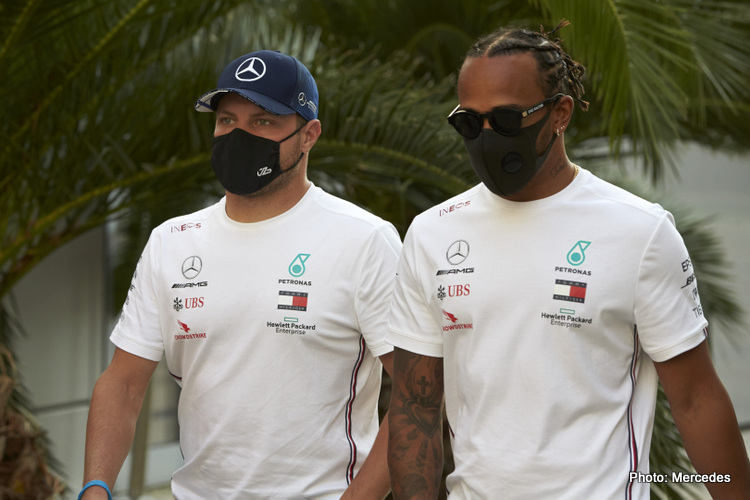 Mercedes’ Valtteri Bottas has defended his performance over the 2020 Formula 1 season, suggesting it would be hard for any driver to improve on his efforts with Lewis Hamilton as a teammate.

Falling short for the fourth-straight season in his attempts to beat Hamilton in the driver’s championship, Bottas has only 205 points to Hamilton’s 332 with one race remaining.

And while by Bottas’ own admission 2020 has been a disappointment, he still believes a similar result in 2021 is far from a foregone conclusion.

“Certainly in 2020 I have not achieved the goals I set myself,” he told formulapassion.it. “There have been many strange and unfortunate races for me and races where Lewis was stronger than me.

“In the end every year more in F1 makes you stronger. Ultimately this year has not been very different from my previous ones. I’ve had good moments and bad moments, like every season. I certainly learned a lot from defeats and I become a stronger driver every year.

“I can’t wait to start the new season starting from a blank sheet in the hope of having a linear season without too many blows of bad luck, like punctures and things like that.”

Unfortunately for the Finn, his future with the team has grown increasingly clouded with the emergence of Mercedes junior George Russell, who, particularly after Sunday’s Sakhir Grand Prix where he nearly won the race as Hamilton’s stand-in, has made a clear case for Bottas’ seat.

Nevertheless, Bottas insists that over the course of a full season, it would be hard for anyone else to do better with Hamilton as their measuring stick.

“Of course it is not easy to race against a teammate like Hamilton who, if we look at the numbers, is the most successful driver in the history of Formula 1,” he said. “It is not easy to beat him but in trying to do so I always discover something new about myself and I try to capitalize on the mistakes I make to try not to repeat them.

“But there were also positives this season for me, which I absolutely have to bring back to next season as well. I certainly don’t intend to give up, hard work has always paid off in my career and I really believe in that.

“Lewis was the best of all this year but I think no one could have done a better job than me in my car. The team can choose any driver every year but in the end they have always confirmed their confidence in me.”

Expanding further, Bottas maintained that while the points deficit may be large, the gap in true performance is significantly smaller.

“In qualifying I think I am at Lewis’ level and even surpass him sometimes,” he explained. “The difference between me and Lewis lies in the consistency of race performance. Hamilton manages to be at his best level in every lap and in every race, without making mistakes. This comes from his talent but also from his great experience.

“On pure performance I can beat him, but in terms of consistency of performance he is still superior to me. This is not a huge gap, but very small things that then make a big difference on the result.”