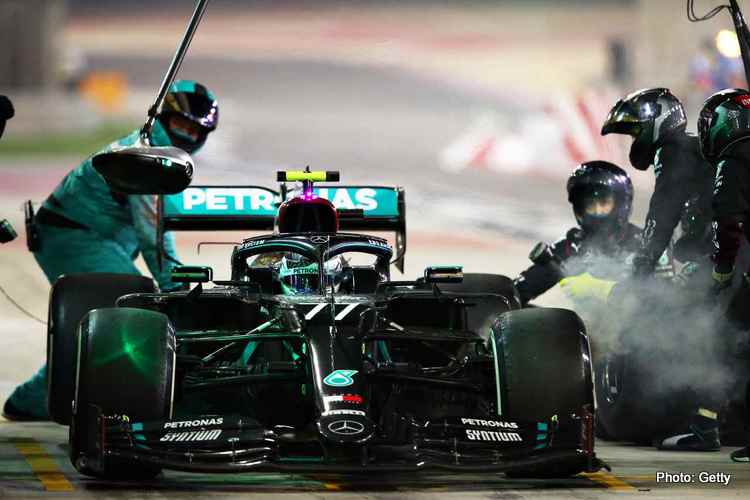 Mercedes’ disastrous pit stops at the Sakhir GP were due to a technical issue with the radio system, says trackside engineering director Andrew Shovlin.

A sequence that effectively cost them the race, the safety car brought out by Williams’ Jack Aitken on lap 62 led Mercedes to try and double-stack drivers George Russell and Valtteri Bottas, only for it to backfire horribly.

First Russell was fitted with the front tyres intended for Bottas’ car, and then Bottas, no longer with a full set available for him, was sent back out on the tyres he had come in on.

Afterwards, Russell had to pit again in order to avoid a penalty – although the team still received a €20,000 fine – while Bottas was a sitting duck for several drivers on much fresher rubber.

Discussing the mishaps on the F1 Nation podcast, Shovlin explained how the team’s radio system led to the mix-up.

“We haven’t had enough time to get an absolute and thorough understanding of what went on but we have found a smoking gun,” he revealed. “And that’s to do with how the radio system prioritises messages when, for instance, Ron [Meadows, sporting director] is calling out the crews and getting them to get the tyres ready for the two drivers.

“And there were a number of broadcasts at that time on the radio system… the system knows to prioritise the messages coming from Ron because the most important thing is that the tyres are there, more so than whatever a driver says or whatever someone else in the crew might say, but it looks like there is a period whereby the system is [not] deciding to let the prioritised message through.

“We missed a key bit of the broadcast such that half of the tyre collectors didn’t get the message and it looks like half of them did. Therefore, we’ve got the cars coming in and all the tyres are not ready in the pit lane… there was very little time between the Safety Car and George coming into the pits.”

And while Shovlin concedes it simply could have been avoided had they decided to keep their drivers out, he maintains it was still the right call.

“Yeah we could have gone until the end of the race and in hindsight, if we’d stayed out, if we’d avoided the issue, that would have been brilliant,” he said.

“In a sense, the stop was a precaution just to make sure we had the best tyres on the grid, it would have consolidated the lead of the race if we’d been able to perform it well and we need to make sure in understanding it like any other fault you focus on root cause, not all the other sort of noise and chaos around it…