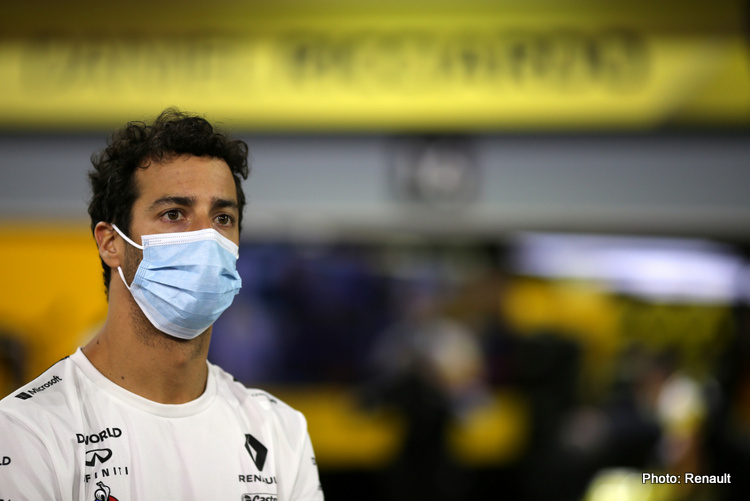 Starting seventh on the grid, it certainly wasn’t a terrible result for Ricciardo, but the Australian could not help but think of what could have been given the chaos around him.

“It’s a pretty sad fifth I’d say,” he admitted afterwards. “I wasn’t particularly pleased with how the race panned out in terms of strategy, and there were a few calls where I thought we just missed the ball, we were just kind of a step behind.

“So to somehow get fifth – we’ll take it, but obviously it’s mixed because Esteban [Ocon, his Renault teammate] is second. Second and fifth is huge for the team, but then you see Racing Point one and three, it’s tough.”

Expanding further, Ricciardo explained that while he was happy for Ocon to get his first Formula 1 podium, he couldn’t take much joy in a result that saw third-placed Racing Point extend their lead to 22-points over fifth-placed Renault in the constructor’s standings.

“It’s Esteban’s first podium in F1,” added Ricciardo, after seeing Renault fall to 22 points behind Racing Point in the constructors’ standings. “Obviously [the team] are happy for him but for the constructors’ it was a tough day.

“As soon as the start happened, obviously we were P4 on Lap 1. Max was out, obviously a contender for the podium, and I felt like there was a lot of opportunity today. But we got undercut in the pit stop, so that whole second stint, we spent behind Kvyat, and I felt for the track position we had, we could have done more.

“But it’s all good. Seven more days, we’ll turn the afterburners on and go again.”