Stroll: I’m delighted for the team and so happy for Checo 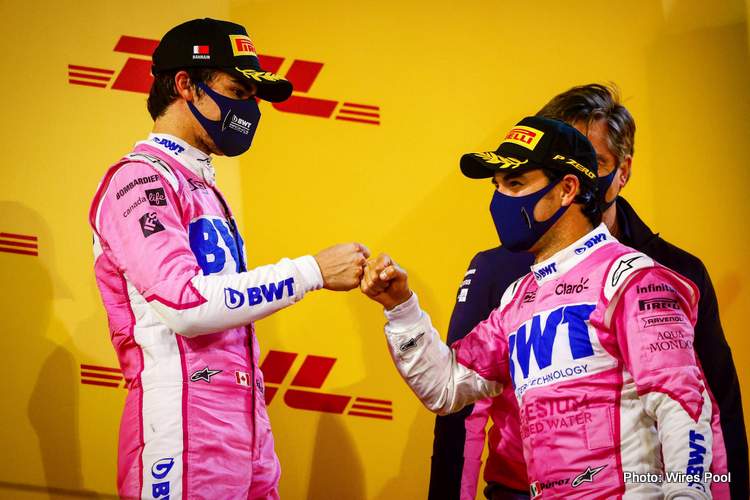 Facts are: Lance was a credible third on the day, in Bahrain, but no match for fired-up Checo. The Mexican on a mighty charge from the back of the field claimed an unlikely but thoroughly deserved victory. Making easy work of his younger teammate during his remarkable charge to the top step of the podium.

With no apparent enthusiasm, when he was interviewed after the race, Lance acknowledged, “Amazing race for the team.

Before adding, “Part of me is a little disappointed. I thought I could win the race. I didn’t really have the pace to overtake Esteban. Unbelievable result first and third. It is what we needed for the championship.

Lance’s gripe was, “I think we perhaps pitted a lap too late and that allowed Esteban [Ocon] to get ahead – but only after a really great battle until the exit of Turn 3 when he got the DRS effect.”

Later he explained in the team report, “I didn’t have the pace to get by Esteban and then I was also a little late on the DRS, which helped Checo get by at Turn 4. I braked a little too late and he was then past me. It’s one of those things, but the important thing is the team result.

And, perhaps with Racing Point spin-doctor advice, the 22-year-old he is quoted saying, “I’m delighted for the team and so happy for Checo. He’s been a part of this team for a long time. He’s been running up at the front so many times in his career and he totally deserves a victory.

“It’s an unbelievable result for the team to get both cars on the podium and it’s exactly what we needed to bounce back from last weekend. We’ve had a great car all season and it was really strong this weekend and we delivered when it matters.

“I’m really excited about our potential and we’ll be looking to end the season on a high in Abu Dhabi,” added the Canadian.