Perez: It just gives me a bit more peace with myself 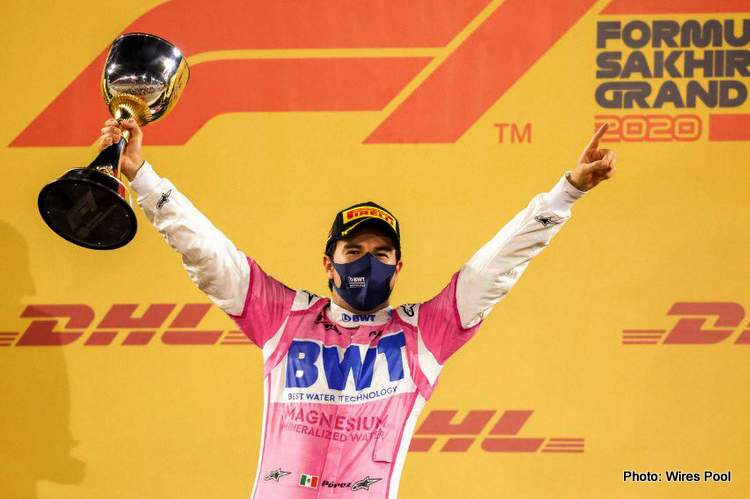 On Sunday night the Formula 1 world was treated to Sergio Perez’s finest hour at the pinnacle of the sport, delivering his greatest performance in the beautiful race that was the 2020 Sakhir Grand Prix.

A race packed with so much drama, starting with the lap one, Turn 4 incident in which Charles Leclerc speared the front of his Ferrari into Sergio’s Racing Point forcing the Mexican to pit for repairs and a tyre change before he was released at the back of the pack.

What transpired thereafter is the stuff of legend in a race which would do justice to a full season of Netflix let alone an episode.

Without a job in F1 next year, the prospect of his absence from the grid is a travesty as, on current form, he is up there with the very best we have in the field today.

Checo will never forget this day – and you shouldn’t, either!

Sit back, relax and relive a race for the ages. Enjoy! 👀🍿#SakhirGP 🇧🇭 #F1

Speaking after becoming F1 110th Grand Prix winner, and emotional but joy-filled Checo told said, “I’m a bit speechless. I hope I’m not dreaming, you know, because I dreamed so many years of being in this moment. Ten years, ten years it took me. Incredible. I mean, I don’t know what to say, you know.”

“After the first lap the race was again gone – same as last weekend. But it was all about not giving up, recovering, going for it, just making the best of what you possibly could. This season the luck hasn’t been with us, but we finally got it.”

While the Mercedes team self-imploded with a rare but bizarre pitstop gaffe which took pace-setter George Russell and Valtteri Bottas out of the equation. Although Lewis Hamilton’s replacement gave it a go in the final stages and was closing fast until a puncture put paid to his chances.

Checo continued, “I think today we won on merit. Yes the Mercshad some issues but in the end my pace was strong enough to hold George who did a fantastic race today.

“I did a big mistake during the [first] Safety Car, I locked up my front left tyre badly, so during my first stint I had so much vibrations throughout the stint. But as soon as I recovered onto the second stint I told my team this car feels just like a limousine, so easy without the vibrations.

“We had tremendous pace and I think we read pretty well the race throughout the weekend; we came here thinking it was going to be a two stop but straight after my long run on Friday we knew what we had to do today.”

Fittingly, the veteran Mexican delivered the first win the Racing Point, he the man who triggered the closing of Force India which in turn sowed the seeds of the Lawrence Stroll-led takeover.

Ironically Checo has been ditched to make way for underperforming but ‘more marketable’ Sebastian Vettel in the team that will morph into Aston Martin next year.

That Red Bull do not see him as the solution to their driver plight is tantamount to neglect of duty, as they so desperately need a driver to push Max and still bring home the bacon, as Checo has done so often with countless inferior cars.

Nevertheless, he explained what the first F1 win means for him and his future, “It just gives me a bit more peace with myself, to be honest. What happens is not so much in my hands at the moment, but I know and I want to keep going, so if I’m not in the grid next year I will be back in 2022.”

Sergio’s first F1 win on the night came on the occasion of his 190th Grand Prix start, prior to that he had scored 10 podiums since he made his debut at the 2011 Australian Grand Prix with Sauber.